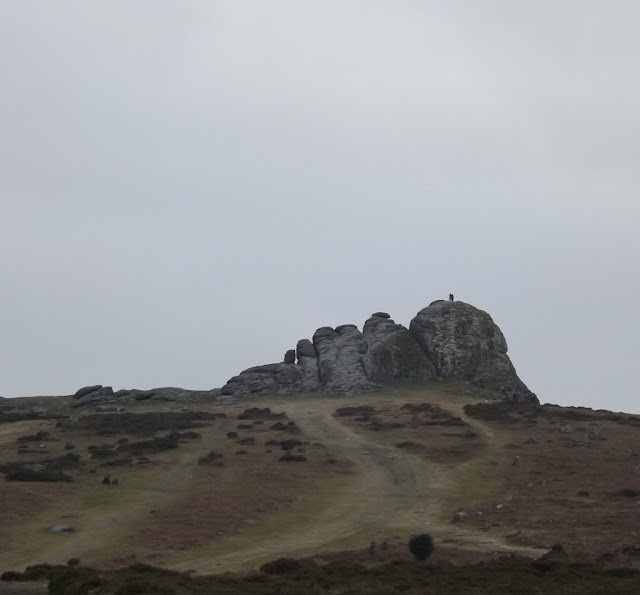 Another avenue Tor, where the elements have eroded an area between two main granite outcrops, Haytor is one of the main tourist attractions on Dartmoor. In the nineteenth century, steps were cut in to the stone to allow people easy access to the top. Stunning and impressive though it is, it just doesn't set my pulse racing like many of the other tors. I can't possibly explain why. Perhaps the inability to ever be alone there plays a part but Hound Tor is similar in that respect and I still love it. Anyway, on Sunday, we decided to go, as a friend had said a new cafe had opened near the car park at the base of the hill. We don't get out much in the cappuccino sense, so the idea of cake and hot drinks combined with the walk was very appealing. No Snippets allowed though.

We started by walking around the side of the hill to the main quarry on the site. It was minus three degrees centigrade out of the bitter wind and we were glad to drop down into the little wildlife haven this particular abandoned quarry has become. The last time we were here five years ago, the entire stretch of water was alive with tadpoles and newts. It was Easter time and blisteringly hot. We saw a young Adder and two lizards that year. No spawn yet this time I noticed….the frogs have more sense over here. 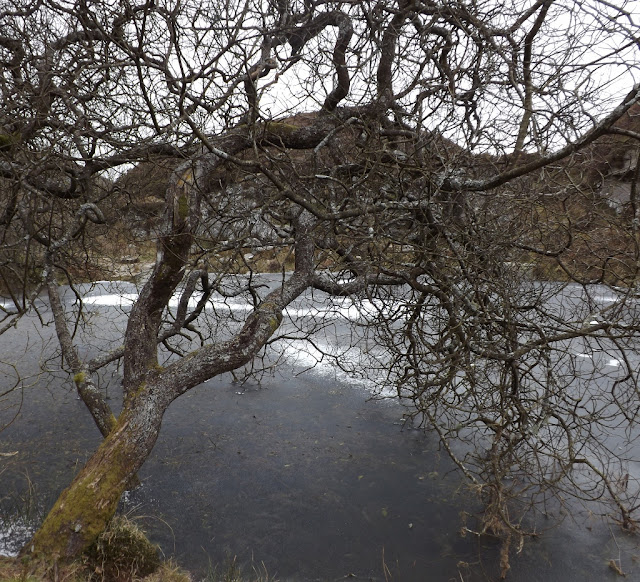 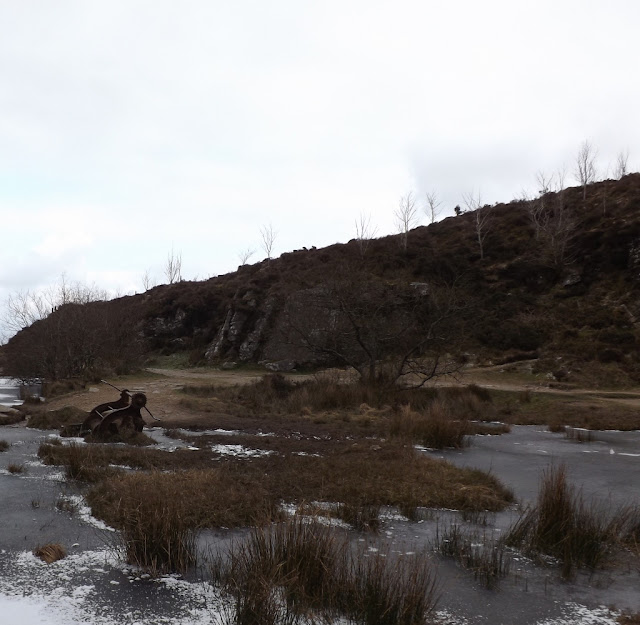 I found some really interesting facts about quarrying around Haytor so I'm going to lazily cut and paste them. To punish me for that laziness, Blogger has kindly done that irritating highlighting thing again:

The granite below the tor has fewer large feldspar crystals than at the tor itself, and this was preferred for building. There are several quarries on the northern slopes of Haytor down which were worked intermittently between 1820 and 1919. Between 1820 and 1858 the rock from these quarries was transported by the Haytor Granite Tramway to the Stover Canal. The tramway itself was built out of the granite it would carry, and due to its durable nature much of it remains visible today.
Haytor granite was used in the reconstruction of London Bridge which opened in 1831 and was moved in 1970 to Lake Havasu City in Arizona. The last rock was quarried here in 1919; it was used for the Exeter war memorial.
Haytorite, a variety of quartz found in an iron mine adjacent to the Hay Tor granite quarries, was named “in honour of its birth-place

Now Blogger is continuing to punish me by increasing the font size when I preview it whilst it looks exactly the same size here. I give up....I'm sure you'll forgive me!

Out of the quarry and into the biting wind. The views over to my preferred Hound Tor are wonderful. We climbed the side of the hill, avoiding the surprising number of people up here, and make our way all the way round. 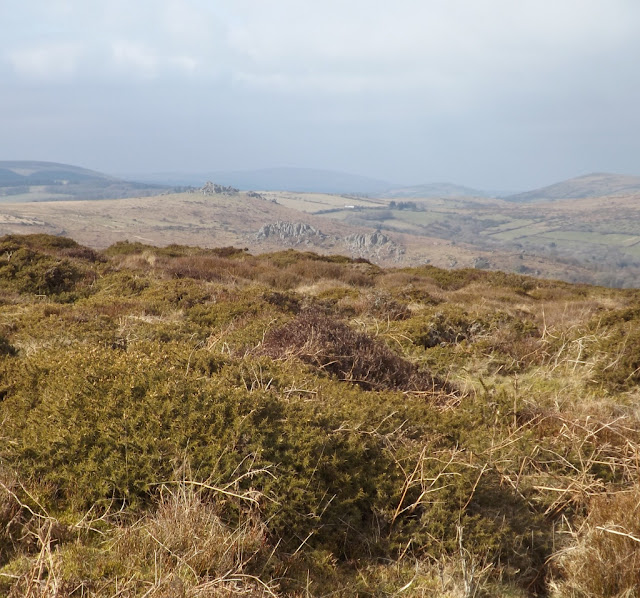 Hound Tor and Greator Rocks in the distance 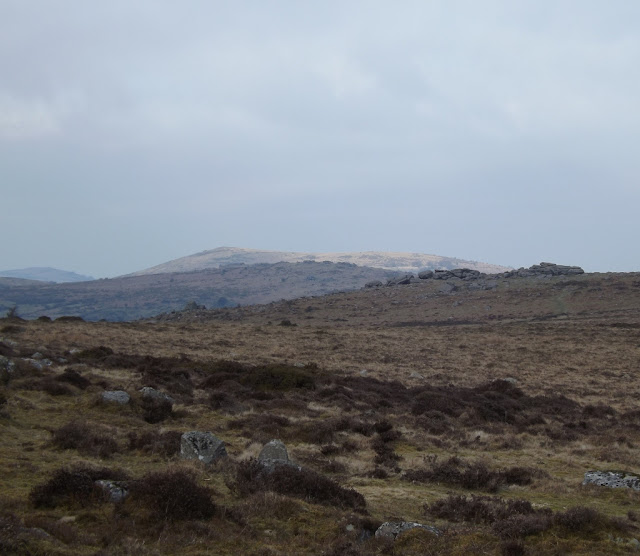 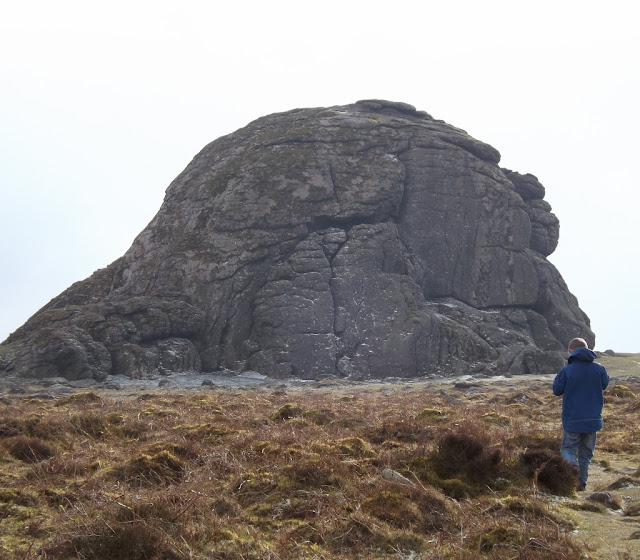 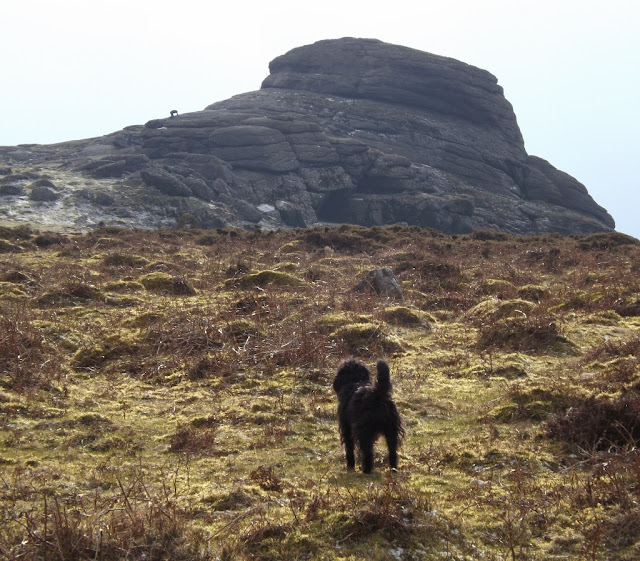 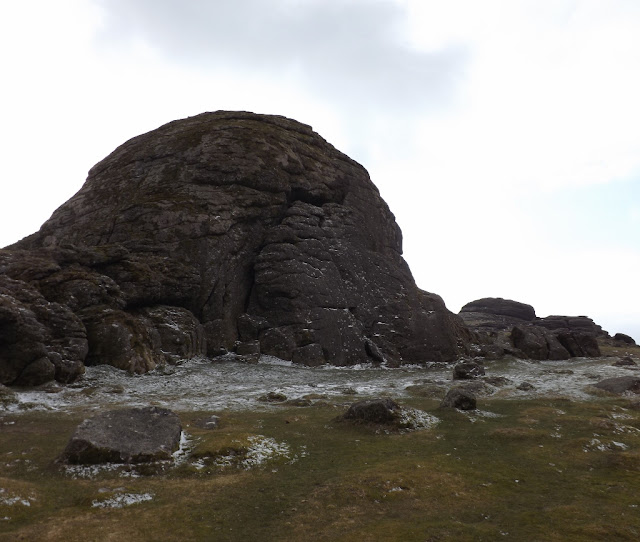 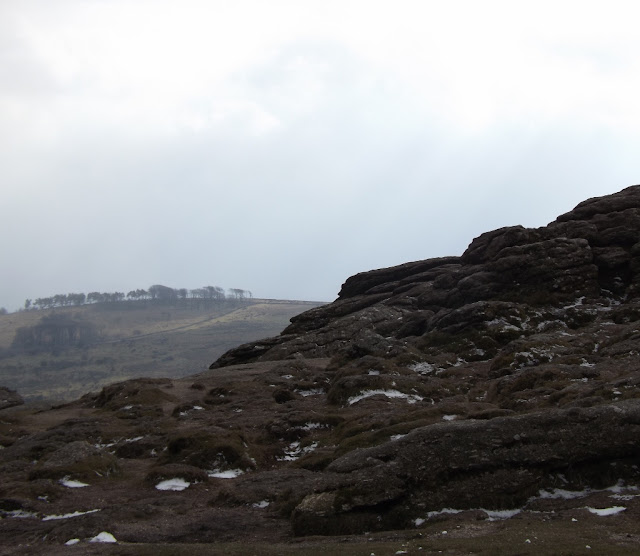 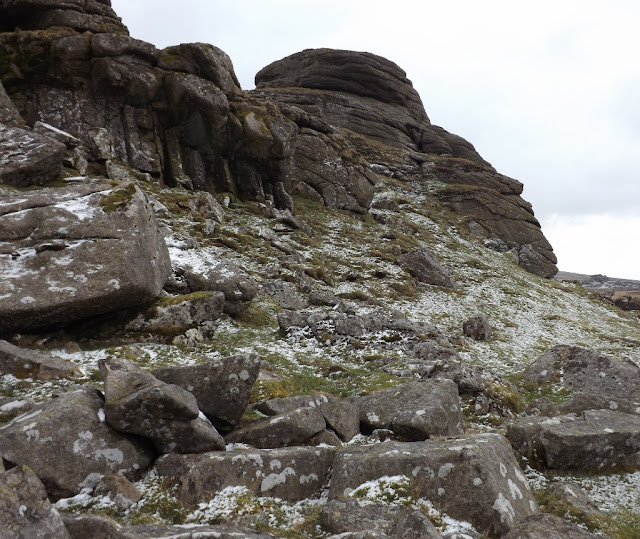 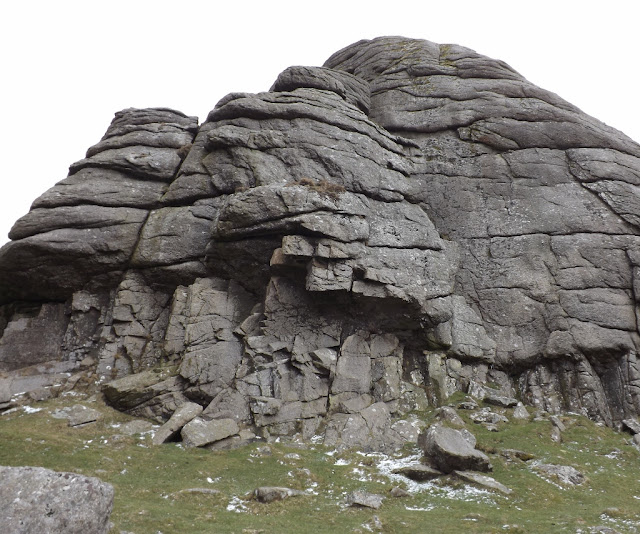 There were amazing icicles hanging up high and this big thick patch at the base: 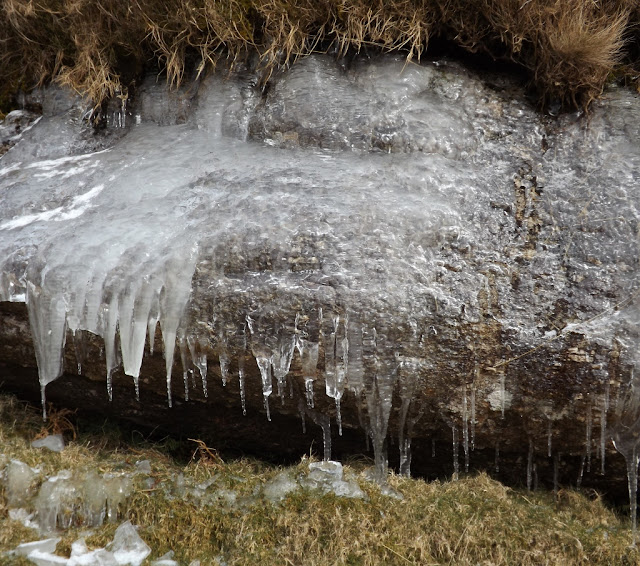 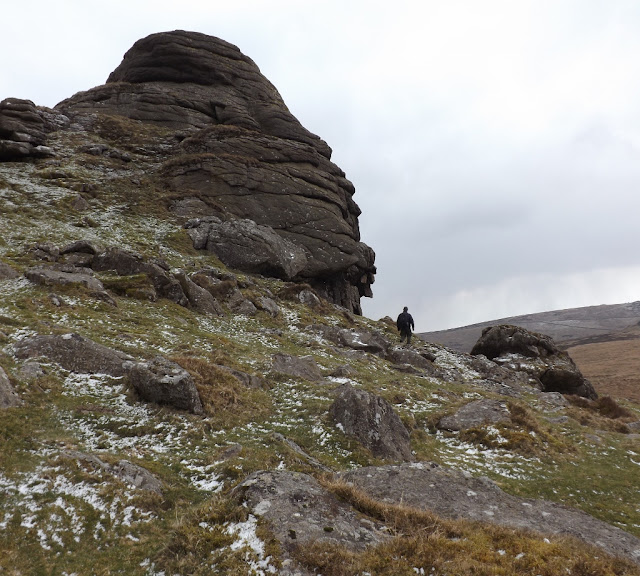 The place is a Lichenologist's dream. What a great job to have. I wonder how many of you would make the same career decisions now as you did when you were young? Mine would be very different with the relative wisdom of age. 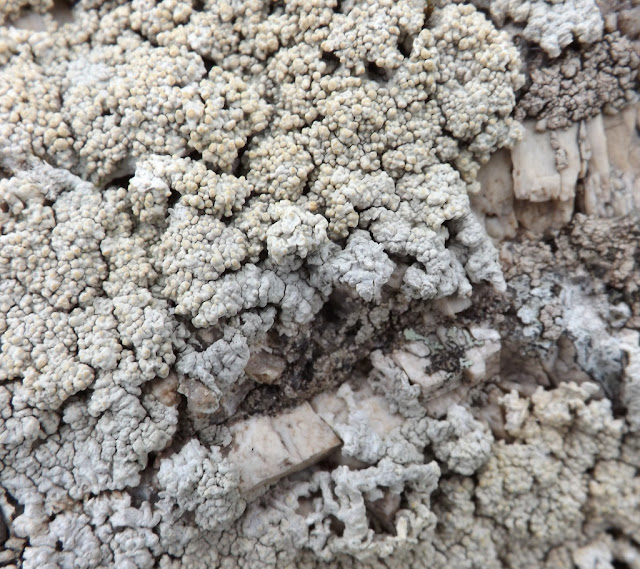 Pertusaria Corallina I think and back to normal text size.... 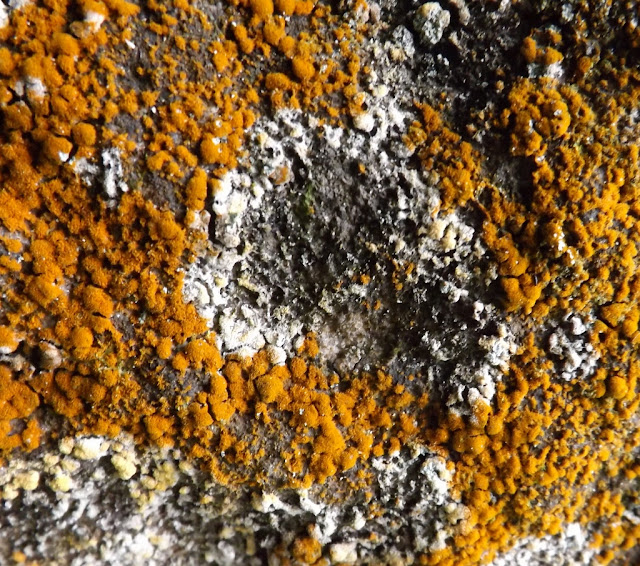 I just can't find this one; not with these tiny cushion structures in this colour. I won't be passing those Lichenology exams any time soon!

Down the main drag to get our reward which was excellent, if mind-blowingly calorific. All the benefits of the walk wiped out at one very comfy sofa sitting. Then home and wondering if it will be another five years before we return. 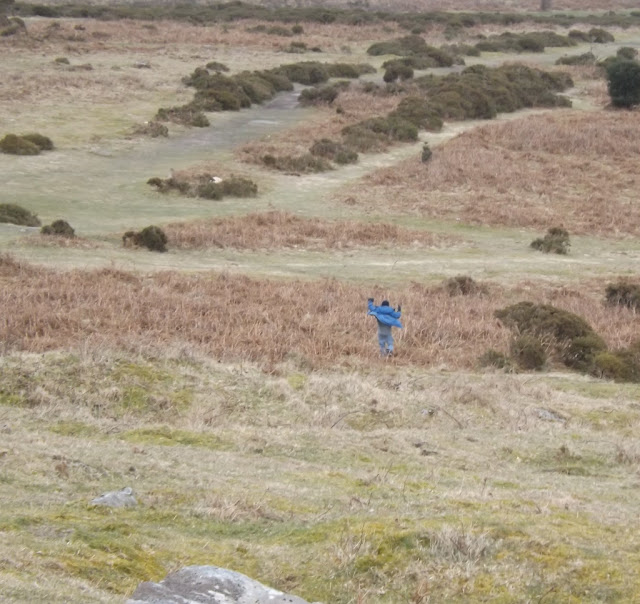 Today there is a thick mist covering our part of the moor and people are cutting down gorse on the lower slopes in preparation for swailing, or burning, of this invasive shrub. My neighbours tell me that twenty years ago there was none at all up here; now it is everywhere. As Snippet and I walked this afternoon, all I could hear was the strange sound of many chainsaws coming out of the gloom. I took the camera but, frankly, the mist was so thick it was pointless. Until next time, here's Snip on Sunday, almost show-worthy if there were a Mutt section at Crufts. 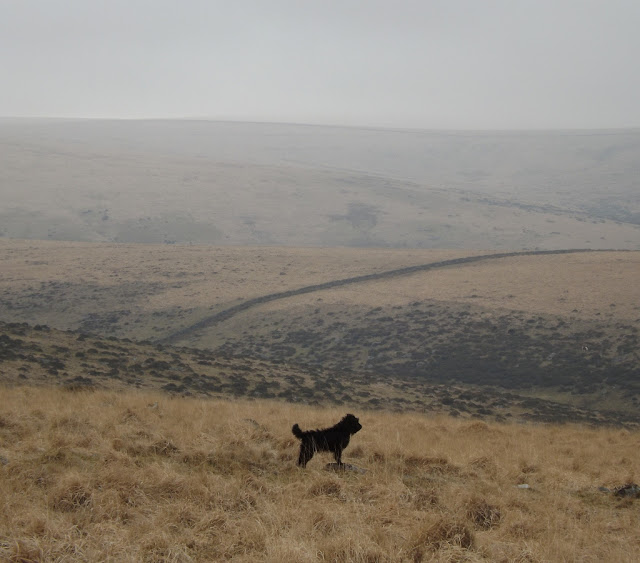