EVOLUTION OF A DRAWING 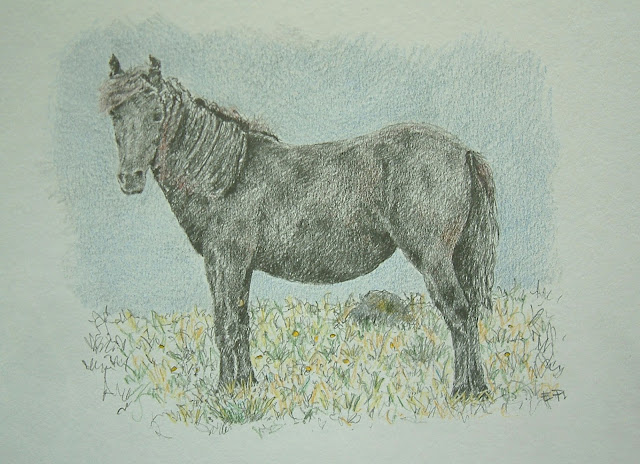 Yesterday I sat down to draw one of the ponies from the day before and was reminded, when I read an email from a friend who sent me a few quilting blogs with advice, that these people often take progress photos as they construct one of their beautiful quilts. So, I thought I might do the same with a drawing, in case anyone would be interested to see the process. Unfortunately, I thought, looking at the little camera screen without my reading specs, that they were all beautifully in focus. Needless to say they weren't so some are a little woolly looking despite much sharpening in PhotoShop. So here goes...... 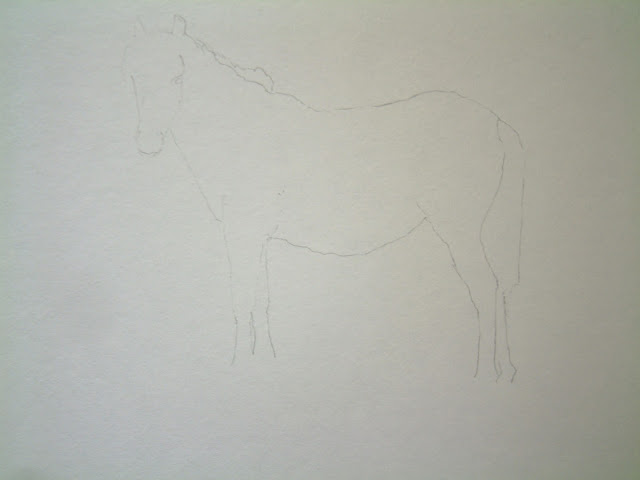 First I start with a very basic outline which is the bit I find most difficult to get right. If it's wrong, the whole thing is going to look wrong. I use an HB propelling pencil usually but often used an F in the past....more difficult to get hold of the leads! 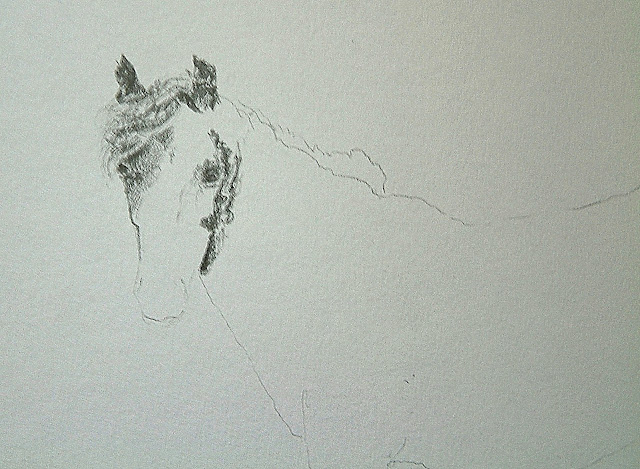 I usually go in for the ears and eyes first to get a sense of the face. They are usually the darkest points too and I can work out lighter shades from there. Here I was also trying to get the fluffy feeling in the forelock. 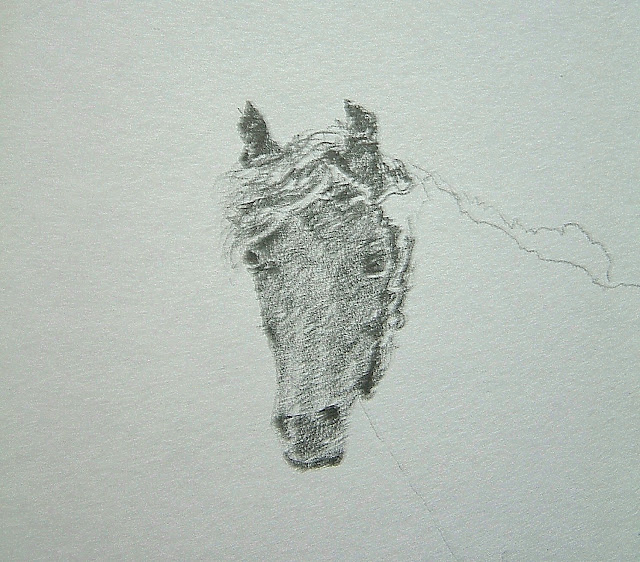 Sorry - this is a dreadful picture! You can see I'm putting the nostrils and bone structure into the head here with areas of shadow. I've also made a start on the very strange dreadlocky mane he had, with curly ends. 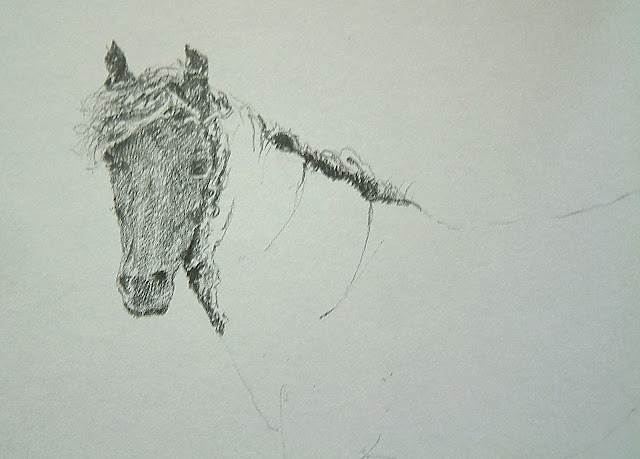 Filling in the areas of deep shadow again here where the mane separated and flopped over the other side of his neck....avoiding getting to those curly bits. 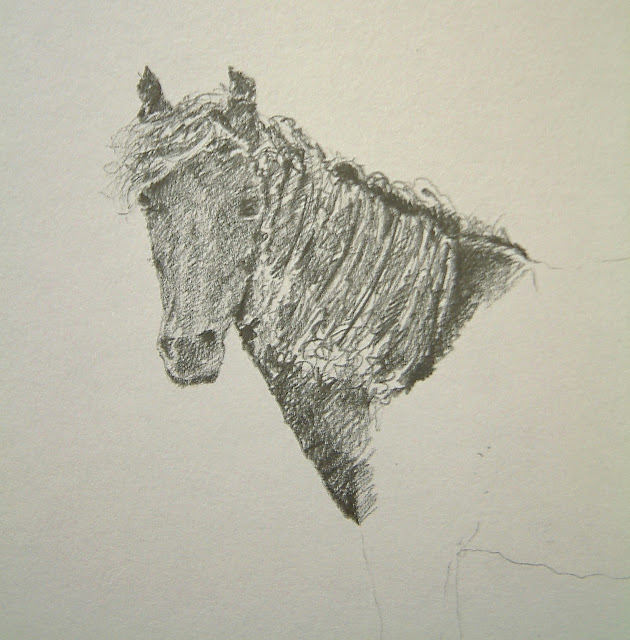 Attempting the curly bits and trying to get the impression of the matted nature of the mane. 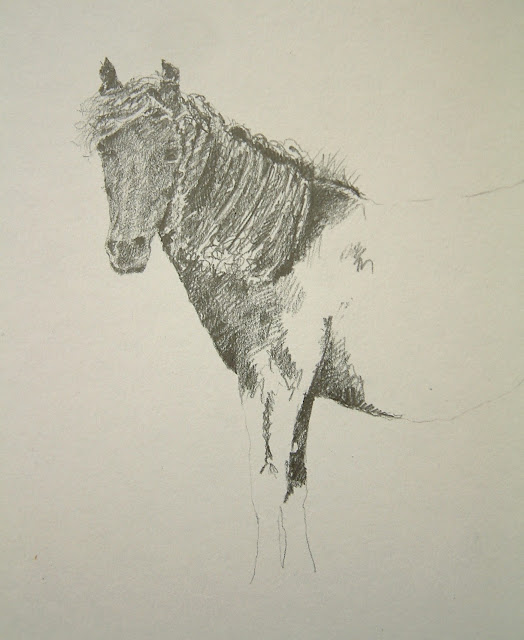 Reasonably happy with the mane so onto shadow areas again and just starting to build up the muscle tone in the legs. 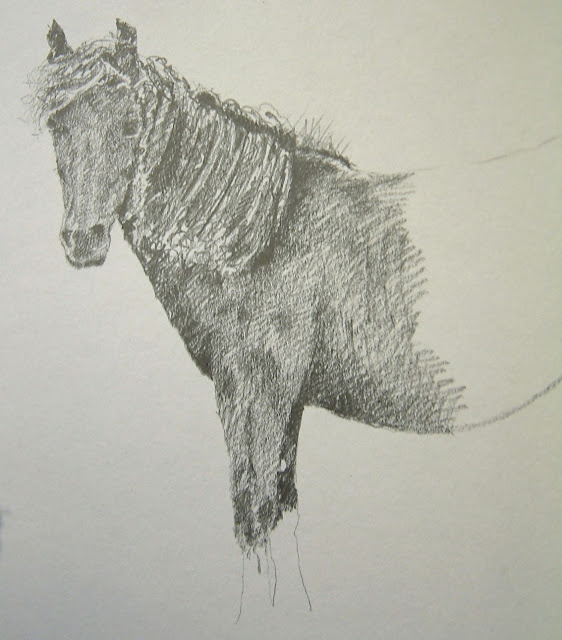 Here I've started to fill in the big areas of shading on the belly. This pony was very dark bay with strange bright-ish brown highlights in the curly bits of that pesky mane. 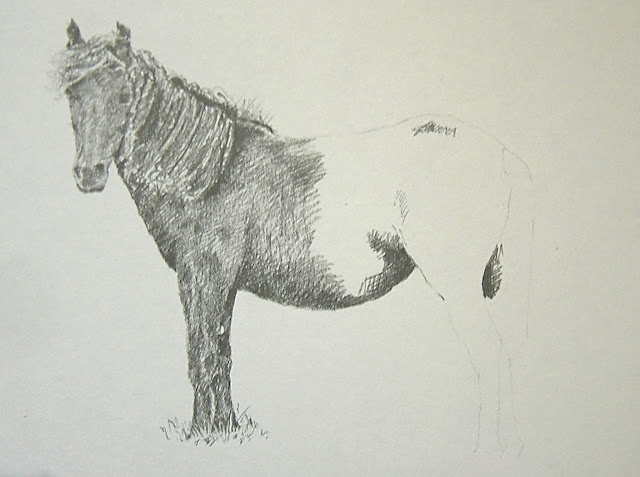 Building up the grass around his fetlocks(fiddly!) and into the dark shadows again before.... 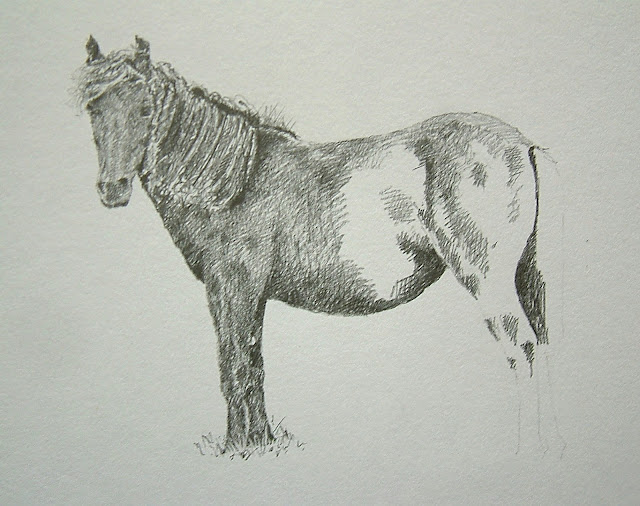 .....darkening areas to show muscle definition on the hind quarters and legs. 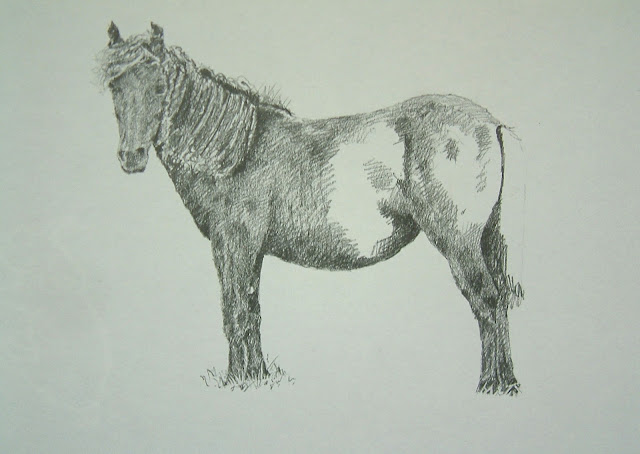 Finshing off the hind legs, working on the light and shade in the bone and muscle structure and avoiding the tail! Even the grass around the hind fetlocks was preferable. 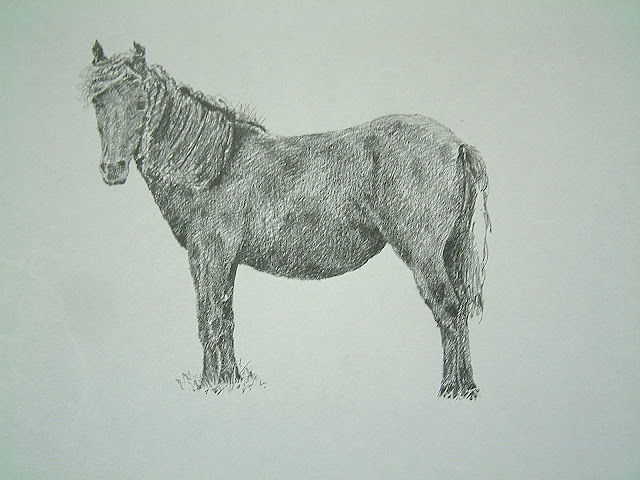 Here I've finished off the markings and shaping of the belly and made a start on the tail with it's fluffy top. 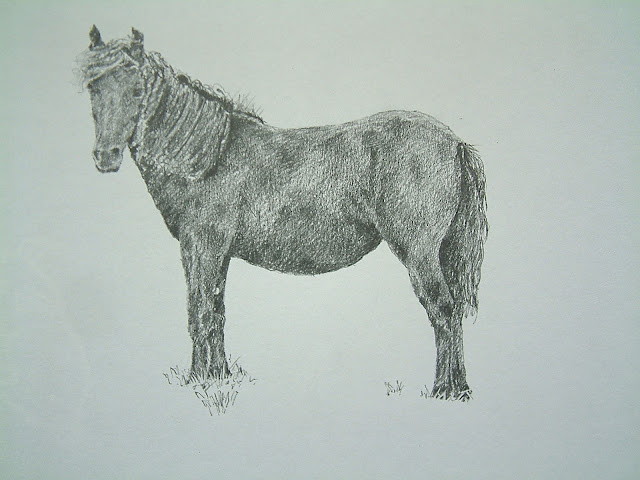 Tail finished, it's onto starting the rather long process of the surrounding grass. In this case, I decided on quite a lot of sky or I would have been hunched up over the desk all day. It's an A4 sized drawing for once, so lots more background than normal. 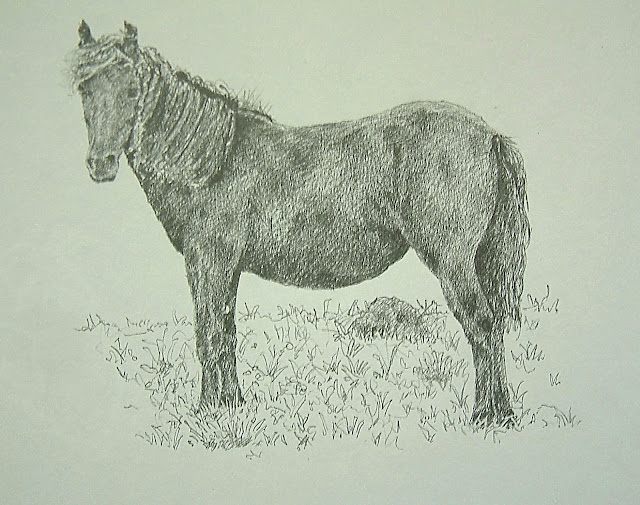 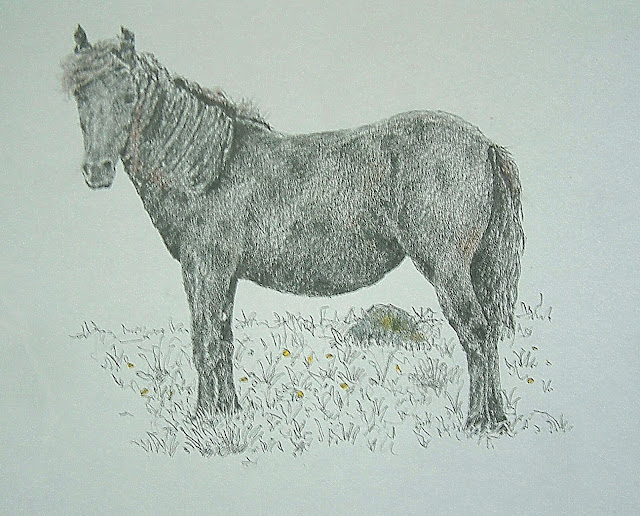 .....and finally some colour, starting off with those little tormentil flowers in yellow. 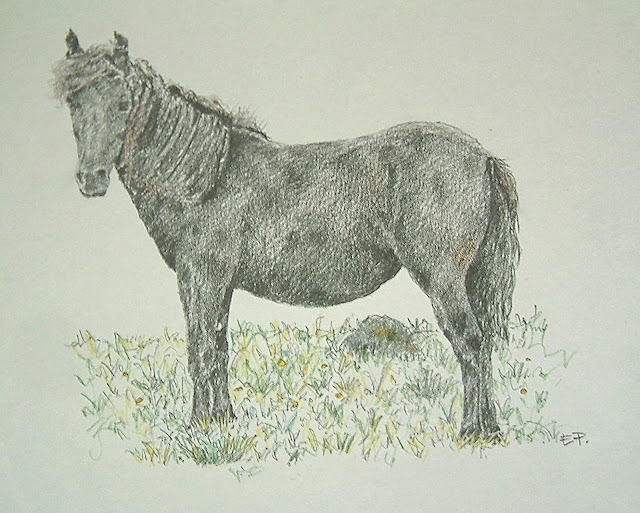 Here I've highlighted the brighter brown areas of the mane and tail and started building up the various shades of green in the grass. Also, I suddenly felt the urge to sign it rather previously! 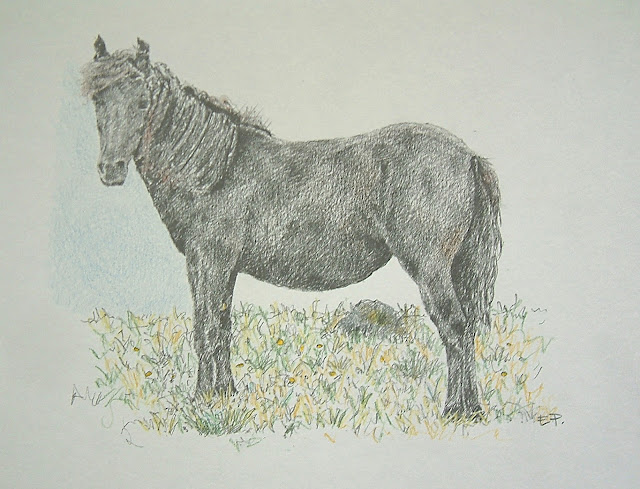 More grass, a slight wash of dark brown over the pony and beginning with a greyish blue on the sky. 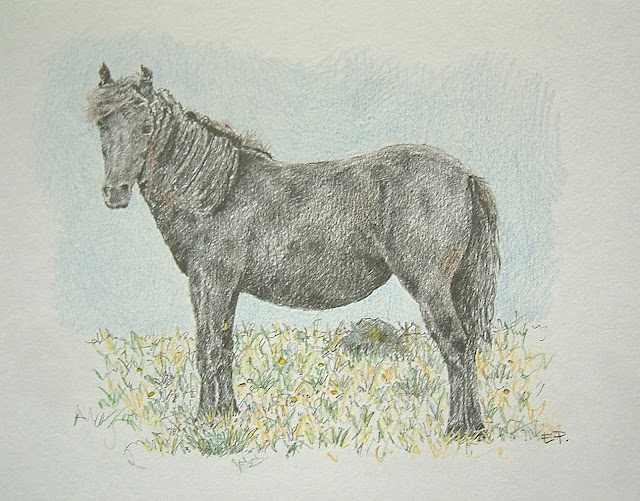 Sky blue done to be followed by a grey over the whole lot for brutal realism....there was NO sun that day and hence no shadow either. That's a shame as I always think a defined shadow helps enormously. However, I'm not going to make one up as it would be bound to look wrong! So finally, here's the finished drawing again:

A note to Bovey Belle regarding getting photos bigger....this is the best I've managed to do so far, by right clicking on the image and selecting 'extra large'. I don't think this is quite as big as you were wanting though....sorry! Till next time....