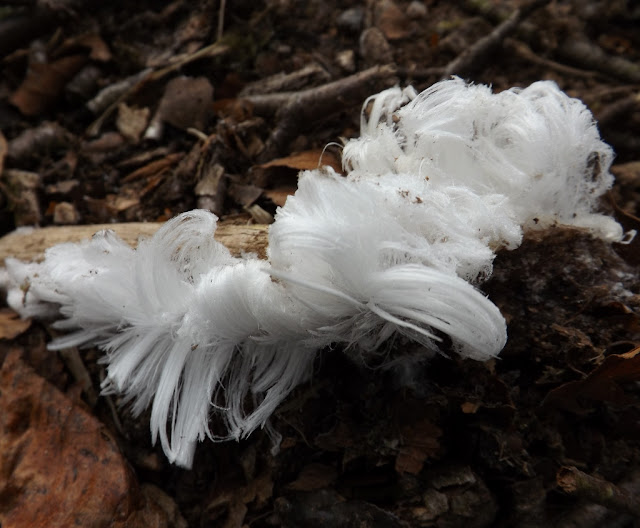 Now I know what they are and how relatively rare they are, it's even more exciting to find them. This was on a tiny beech twig early on Thursday morning on the path up to Trigger's field. This time I touched it after photographing it just to be sure and it did indeed melt to the touch. The only theory as to their formation I could find was on Wikipedia I'm afraid! This is what it said. Stand by for annoying highlighting no doubt:

The formation of frost flowers is dependent on a freezing weather condition occurring when the ground is not already frozen. The sap in the stem of the plants will expand (water expands when frozen), causing long, thin cracks to form along the length of the stem. Water is then drawn through these cracks via capillary action and freezes upon contact with the air. As more water is drawn through the cracks it pushes the thin ice layers further from the stem, causing a thin "petal" to form. In the case of woody plants and (living or dead) tree branches the freezing water is squeezed through the pores of the plant forming long thin strings of ice that look uncannily like hair i.e. "hair ice" or "frost beard".

The petals of frost flowers are very delicate and will break when touched. They usually melt or sublimate when exposed to sunlight and are usually visible in the early morning or in shaded areas.

No highlighting! It's a miracle. That morning, the sky was beautiful; stripy in places and so subtle in its colouring: 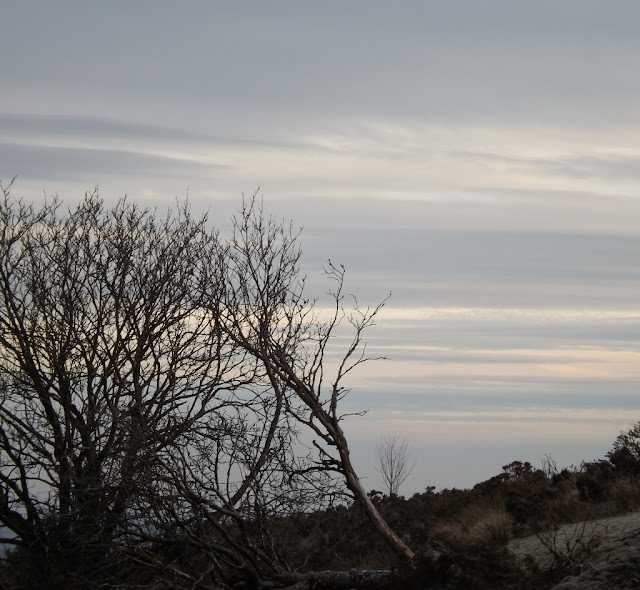 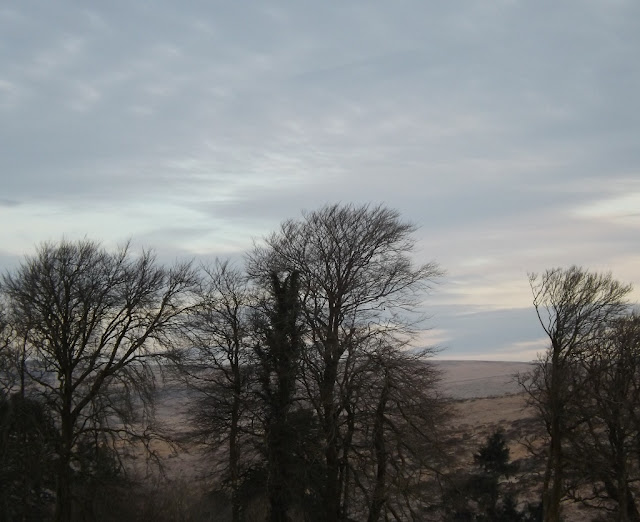 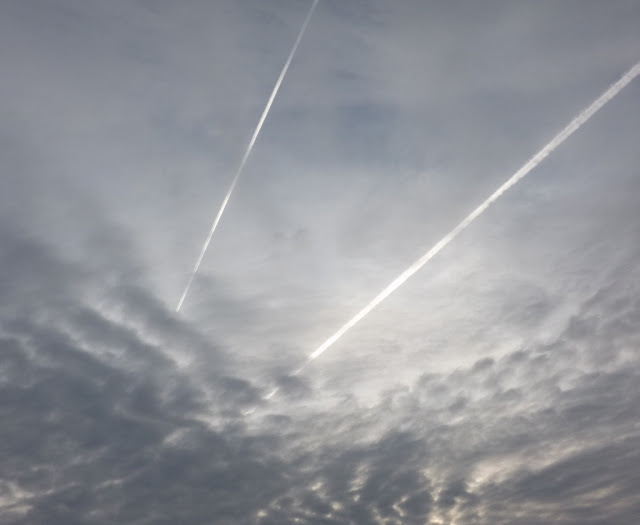 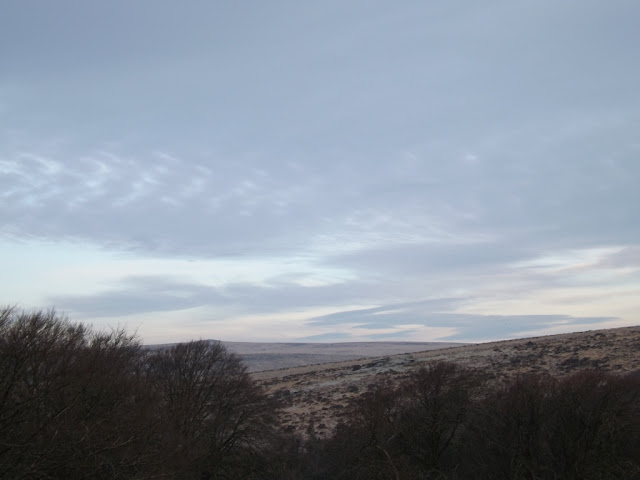 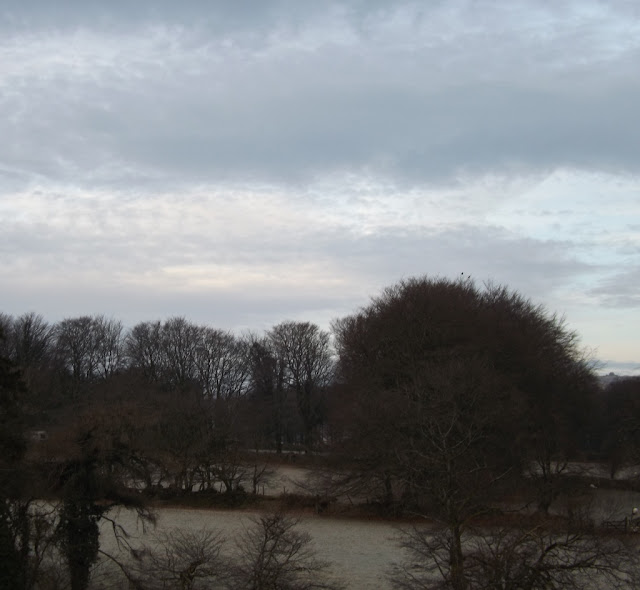 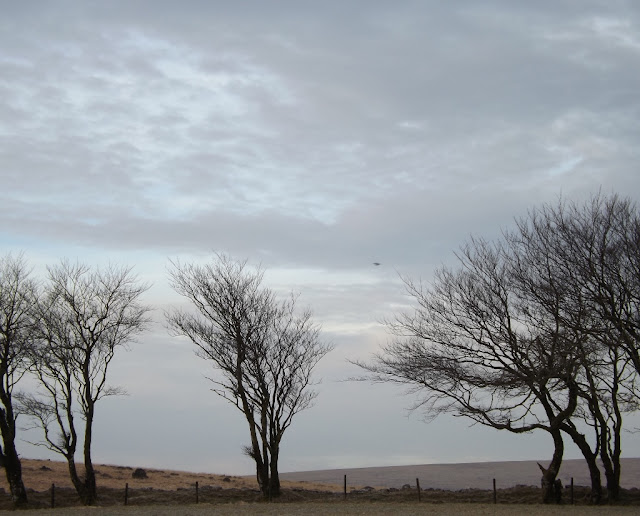 These next two pictures are of a strange phenomenon that occurs in the puddles up here. When under water they look like incredibly regular and vaguely hexagonal vertical worm casts. These pictures are after the water has evaporated and the peaty mud has frozen. Some have collapsed slightly, others remain exactly as they were under water. Do you have these in your puddles? Do you know why they are like this? I don't remember seeing them like this anywhere else but perhaps I was just very unobservant! 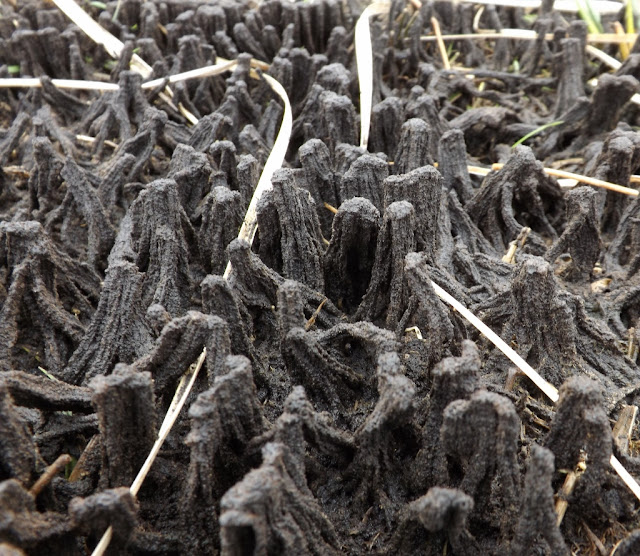 That day I saw these lovely Dartmoors whilst out searching for our original herd. I haven't seen Betty now for months. I do hope they come back soon. 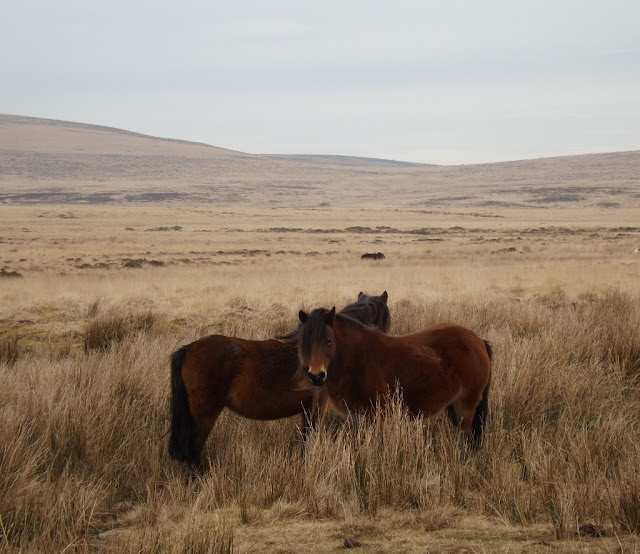 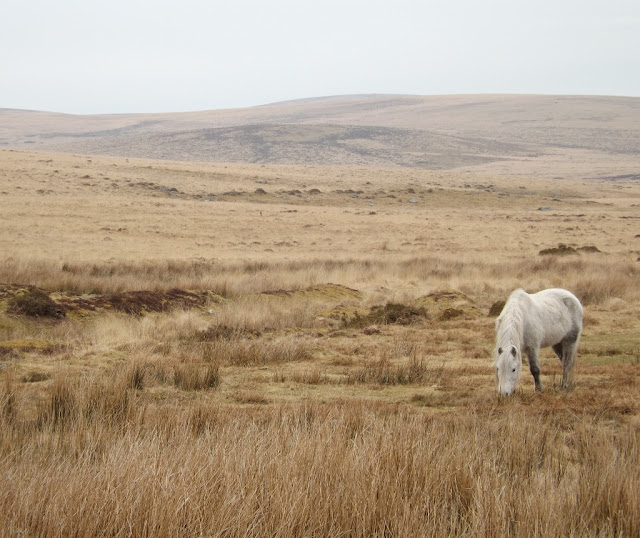 Yesterday was extremely stressful. Our road is being 'patched' at the moment and, being a lane that ends with our little community out on the moor, there are no possible detours. You just have to sit and wait for them to do their thing and move to a pull-in and let you pass. So, with me working in the school library in the morning and an appointment with my spinal surgeon in Exeter at 3.40pm, I decided to fill the time with a walk for the dog and a few errands in Exeter; perhaps even a little lunch? It was not to be.

I've mentioned before how annoying our Renault Megane is with all its electrical foibles but this latest one is more than an irritating. It has a newfangled key card thing which you slot in and wait to be invited to press the clutch and then the start button. Of late, it has been reading 'card not detected' when you put it in. A bit of jiggling and it's been possible to start it but it's been taking longer and longer to respond. What could be a more of an invitation for failure than an important hospital appointment? I came out of the library, went for a cup of boiling water (healthy but not the Lapsang Souchong I might have chosen) with my Mum, and then entered the car at about 11.30am. Took a couple of minutes to start it but I managed to keep my temper and set off for the forest tracks near Drewsteignton, which sits close to Castle Drogo, our nearest National Trust property. We lived in Drewsteignton for ten months while this place was being done up and I used to gallop my old horse Croft, an Arab/Welsh D cross, along the steep tracks at full pelt without a care in the world. 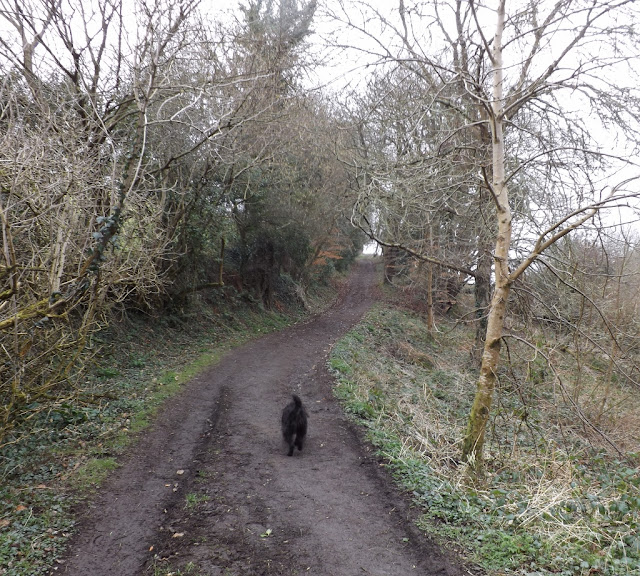 He died of acute colic three and a half years ago now. A hideous and horrifyingly quick way to go, as some of you also may have experienced with your beloved animals. Anyway, Snippet had never been there and had a fabulous time rooting around in brambles and rabbit holes. I would have taken more pictures but, since we lived there, they have cut out great swathes of the forest and it looks incredibly ugly. I did see this amazing youngish tree along the way. What on earth was it twisting round I wonder? 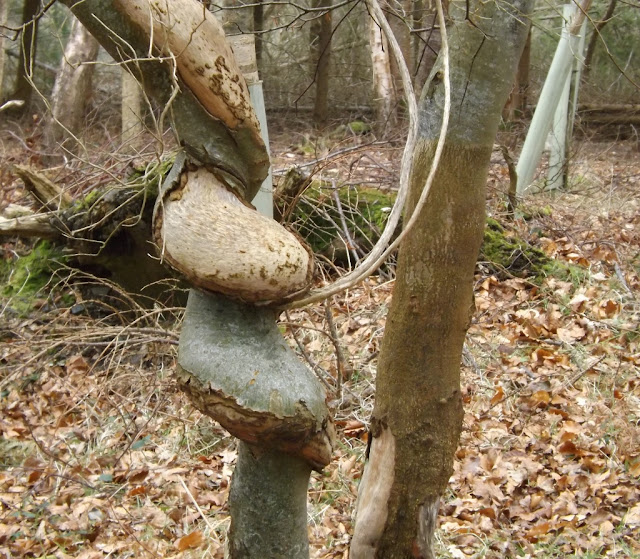 A sign with a silly name and Drewsteignton spelled wrong....twice. You can see where they are re-planting in the background: 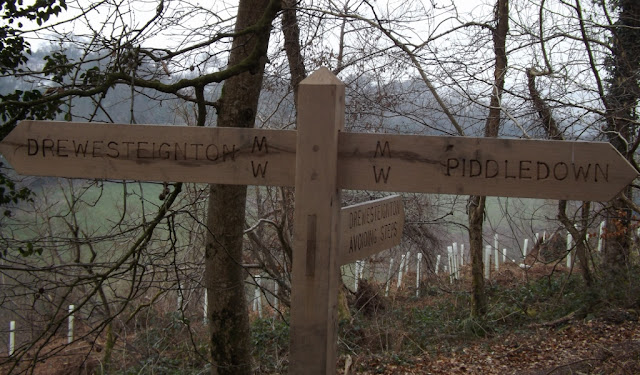 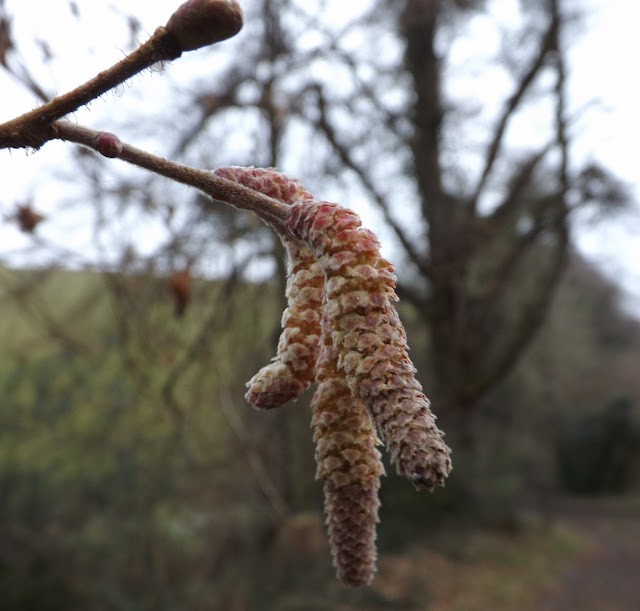 Snowdrops on the path: 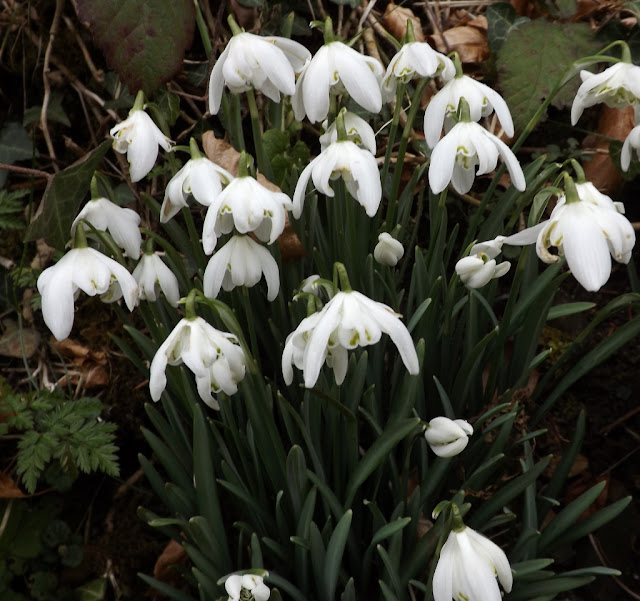 Back to the car, panting after over an hour following a ride I used to do, forgetting what a powerful little horse Croft was and that walking it was more strenuous than I had realised,  and a miraculously quick car start, lulling me into a false sense of security. 1.00pm and a quick stop at Sainsbury's on the outskirts of Exeter. Hungry now after the precipitous forest hike so a sandwich and a treat of some chocolate milk, Belgian chocolate apparently....not so sure about that. At least I'm pretty sure it was bovine rather than equine. Anyway, appetite satisfied, I placed the key card in and waited for my instructions. I am not someone who expresses anger easily but after half an hour, with the clock ticking and the hospital an hour's walk away, I'm ashamed to say that I lost it a bit. Expletives at high volume and hitting of the steering wheel ensued much to the horror of the man in the adjacent trolley-park trying to do his job. A middle aged woman screaming and flailing her arms at the wheel; not very dignified. Back into Sainsbury's to purchase a new battery for the key at VAST expense which made no difference at all to its being 'detected'. Really starting to panic now and my mobile is not as well charged as it might be. And then, after another ten minutes, from nowhere, it started. No chance of my planned browsing in Exeter now; I must get to the hospital without stopping the engine again. Will I ever get home I wonder? Origami Boy is expecting me to pick him up from a friend's at about 5.30pm. Will I ever get there? Will we ever leave there?

I got to the hospital, parked, walked to the meter and realised, having got there well over an hour early, I didn't have enough change for four hours rather than the two I'd expected. What about three hours? No - not allowed. Back to the car to wait until a time when two hours might cover it, praying a parking official didn't come by as the chances of me starting the engine and driving off to avoid them were pretty slim. At last I think I'm safe and go and buy the two hour ticket and take Snippet for another walk, this time round the streets around the enormous hospital grounds. Where are my gloves? My hands are going to drop off it's so cold. Back to the evil car to drop off Snippet and into the hospital to allow them time to send me for the x-ray they usually forget to book. They had forgotten and despite being so early, I ended up going in late to see the surgeon. All seemed well until he started squinting at the image on his screen and saying 'I'm not quite sure what this is', pointing to what appeared to be a big crack in the spine in between the extensive titanium structure. 'Better send you for another x-ray if that's okay?'. Great. The parking has fifteen minutes to go, someone else has just gone into x-ray and my spine may be disintegrating. Twenty minutes later, having been given the all clear thank goodness and officially discharged after 18 months under his care, I sprint (or as close as I can these days) back to the car. Why did I bother when I put the card in and have to sit there for another ten minutes pushing it in and out? At last it starts and to cut what is becoming a very long story short, I got Origami Boy home safe and sound. It could have been so much worse. I will never, never have another Renault. I really need to stop rambling now. You probably gave up paragraphs ago. I'll leave those of you still here with a lovely bit of gnarled gorse, moss and lichen and Snip staring into the distance. Until next time....when I'll try and be more succinct! 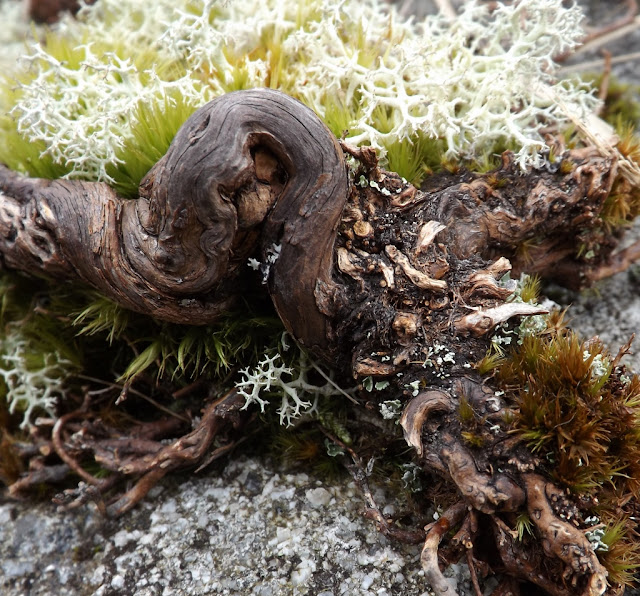 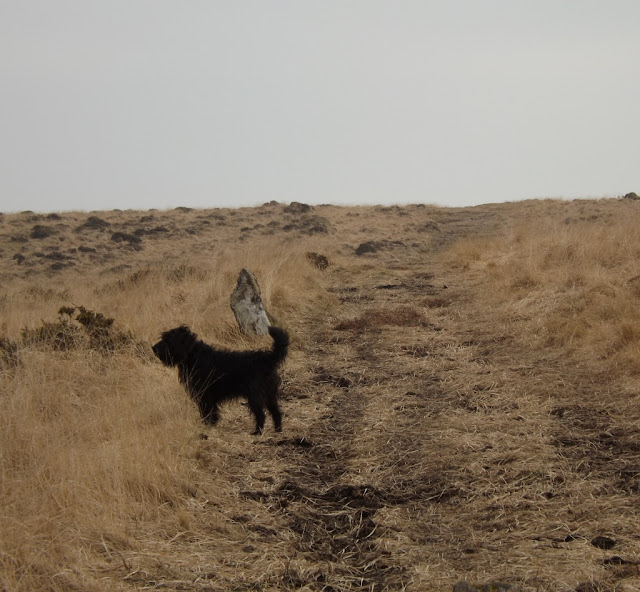