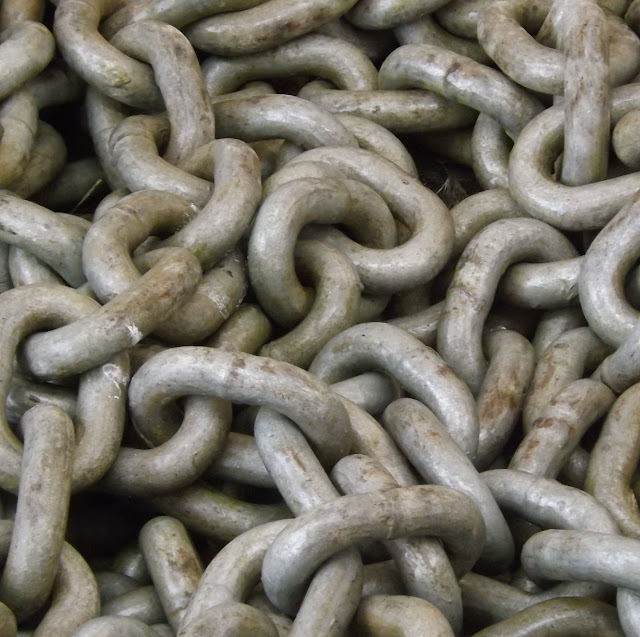 It was tipping down with rain on Monday but we decided to venture forth anyway and I'm glad we did; it was a lovely, if damp, day. Origami boy's companion told us he was a bit scared of the dark but said he did want to go on the spooky mine train ride. This was not a good move and thank goodness I had a torch in my pocket. Snippet was even worse and panicked as soon as we went into the tunnel too, much to the amusement of the very calm Labrador in the same carriage I'm sure. At one point I thought both he and the friend were going to jump out onto the rails. I don't remember much of the ride as I was clutching onto an eight year old boy - not my own - who in turn was clutching my torch and shaking. We felt terrible about it but he recovered very quickly and is now apparently saying he had a fantastic time.

In the 1860s Morwellham Quay was known as 'The Greatest Copper Port in Queen Victoria's Empire'. It lies in the centre of the Tamar Valley Mining District, three miles below the tidal reach of the river. The George and Charlotte copper mine was the only open copper mine in Britain and being only 23 miles from Plymouth and 6.5km from Tavistock and with transport links with both, made it strategically very important. It was exhausted in 1869 having opened in the mid eighteenth century. You can see the remains of the iron rails running across the site everywhere. The Quay's history goes back much further. In 974 AD Benedictine monks founded an abbey in Tavistock, and these monks constructed the quay at Morwellham on the Devon bank of the  transport goods safely to and from  downstream. When the abbey was dissolved by Henry VIII in the sixteenth century the Quay passed on to the Russell family who became the Duke of Bedford family who owned it until 1956.

Minerals and ores actually began to be transported through the quay in the twelfth century when the mining of tin deposits began followed by silver and lead ore in the thirteenth century.  Copper followed soon afterwards and until the canal to Tavistock was constructed by 1817, it was all taken to the quay by pack horses. The canal ended 237 feet above the quay, so an incline railway, powered by a water wheel, was constructed (this one is a fully restored version on the site of the original): 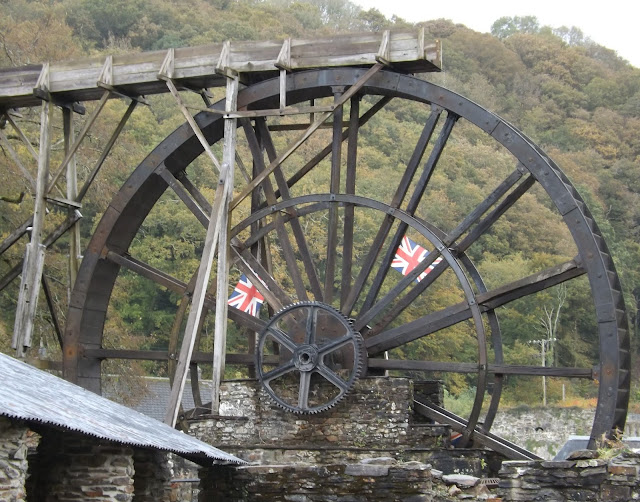 Manganese was also found locally and the ore was crushed to a powder at the quay using water powered crushers and shipped out in wooden casks made at the cooper's workshop next door: 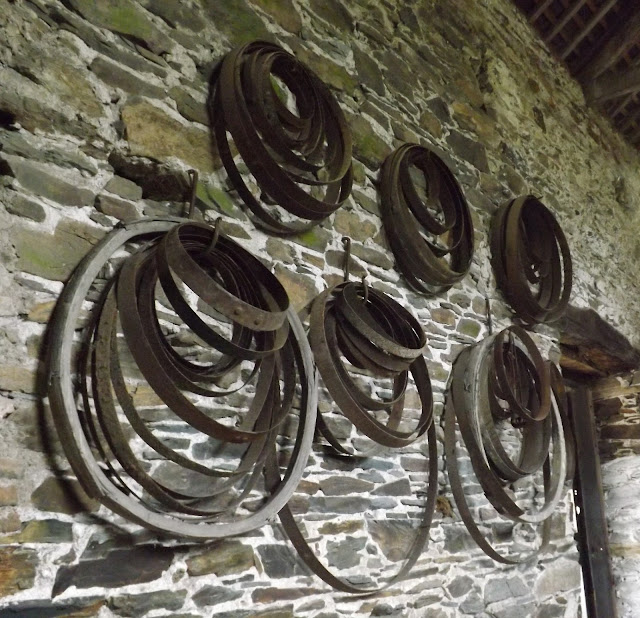 Sailors from all over the world stayed at the quay in the Ship Inn and bought supplies at the chandlers. Queen Victoria visited in 1856 on her way to stay with the Duke of Bedford. The ship below is the Garlandstone, the second last wooden merchant ship to be constructed in Southern England. Built by James Goss, she was launched in 1909 and has been at the quay since 2000. 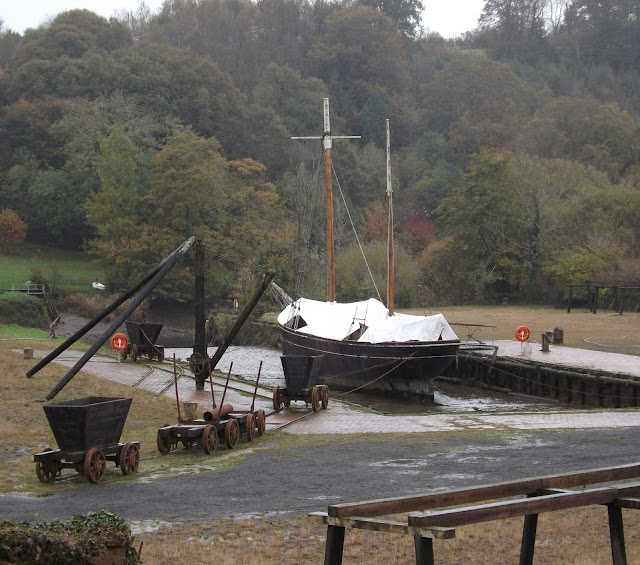 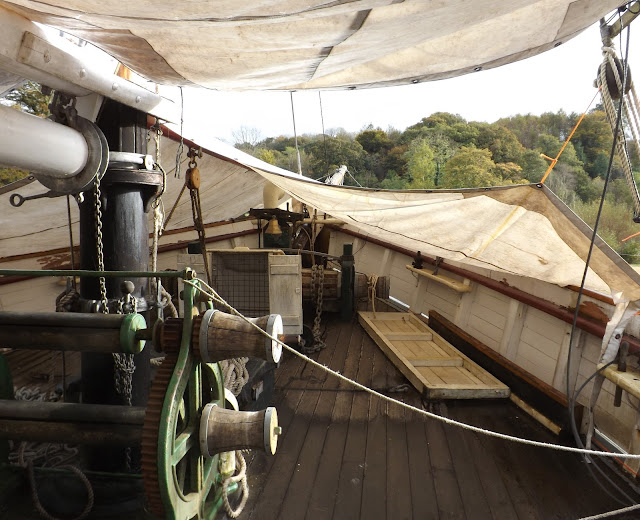 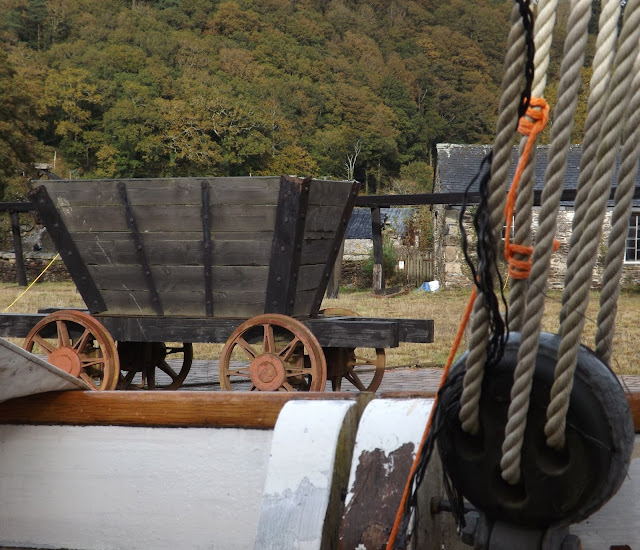 This is the Assayer's Laboratory where he would test and analyse the composition and value of the ore: 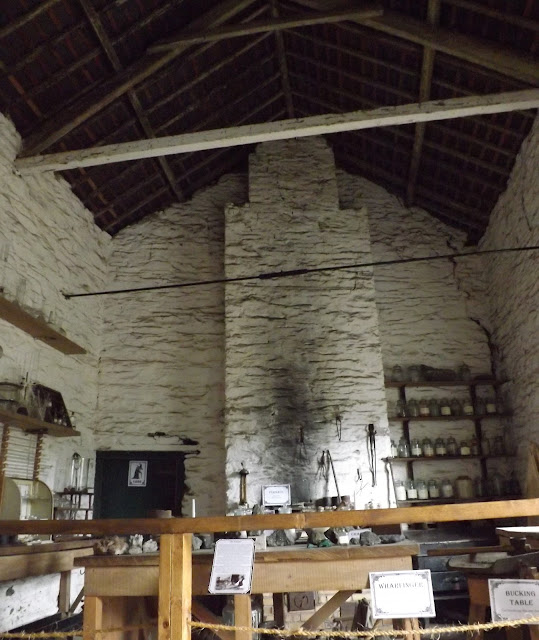 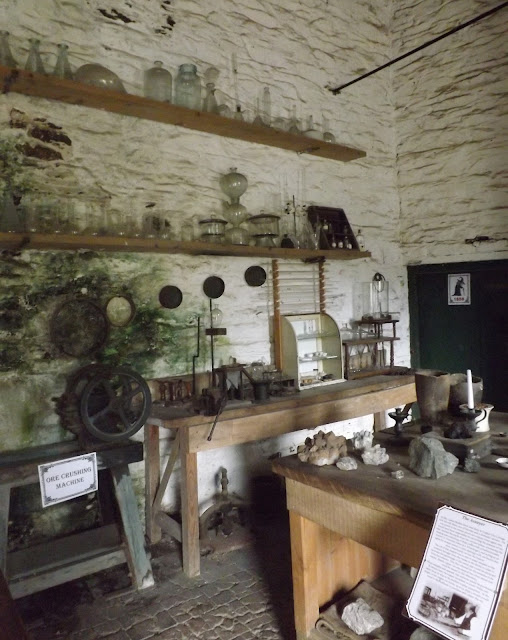 Outside the Cooper's Workshop, looking at the Forge: 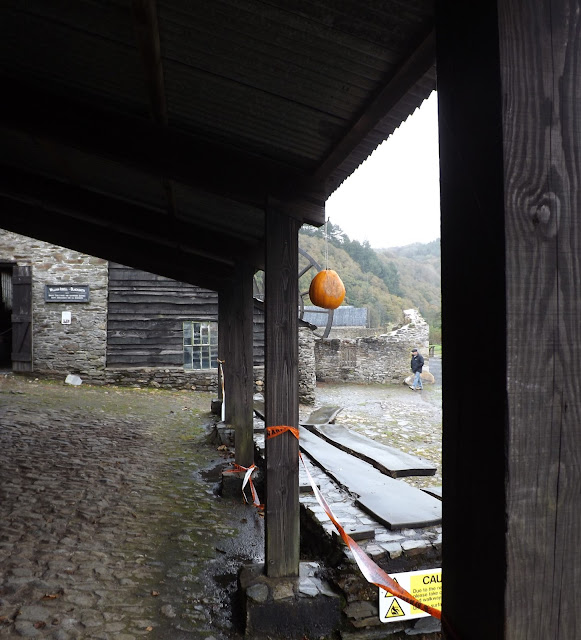 I love these round pillars holding up the cart shed: 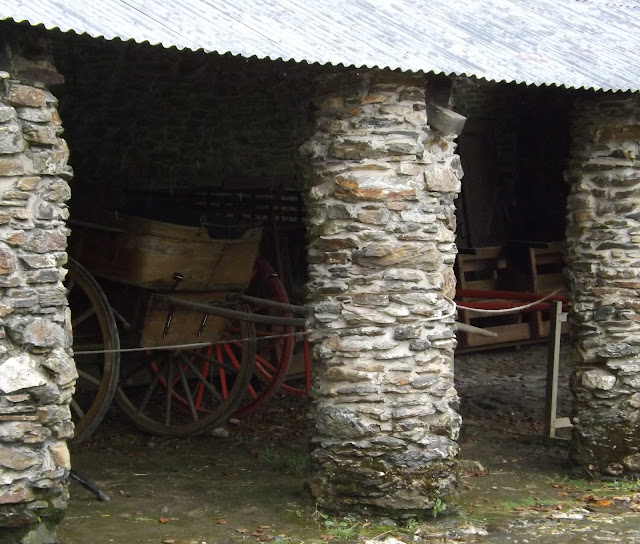 All the glass in this greenhouse, which I vaguely remember from the Edwardian Farm programme, is in the form of tiles; I've never seen anything like it: 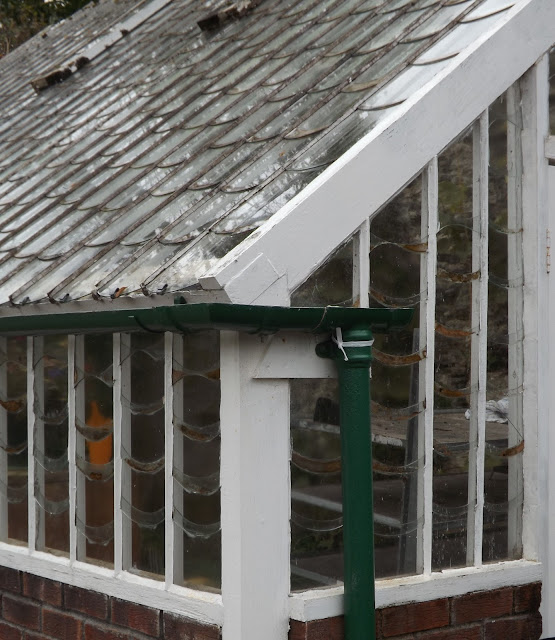 A cobweb on the mast of the ship: 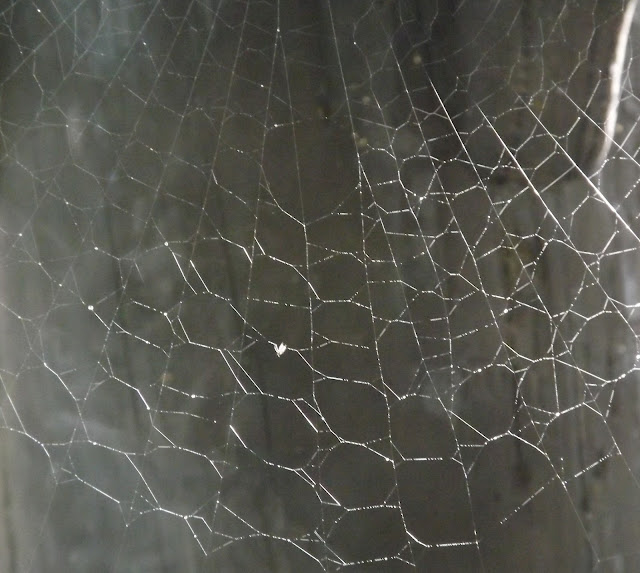 The weather on our way home was NOT nice and made the landscape look all smudgy, like a painting: 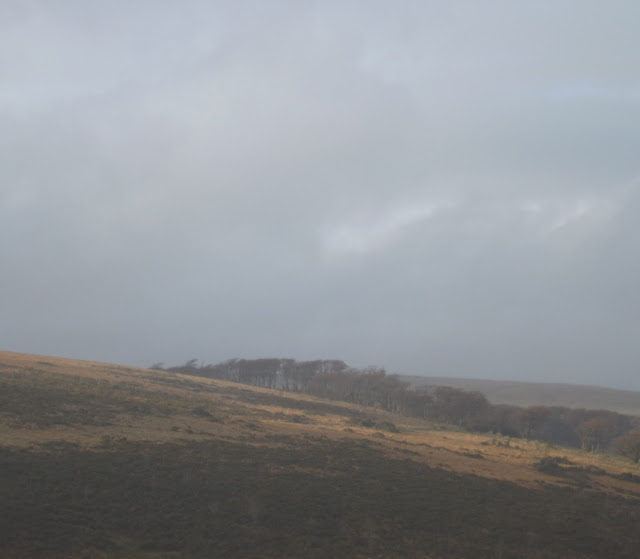 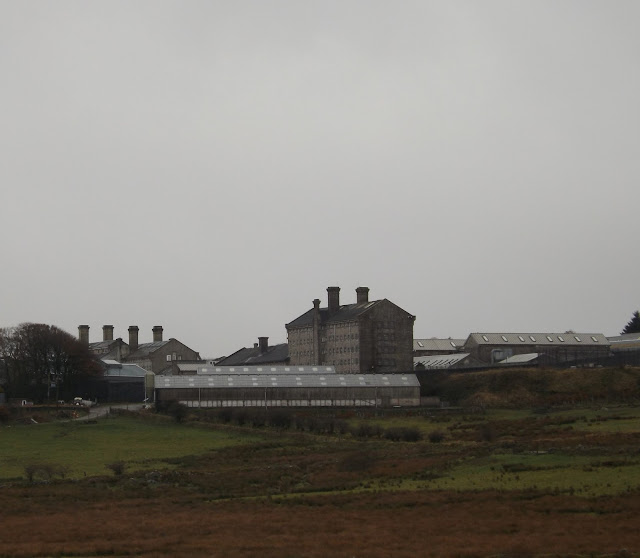 My partner made a bird food perch for me last weekend; here are a few of its visitors - I love my camera!: 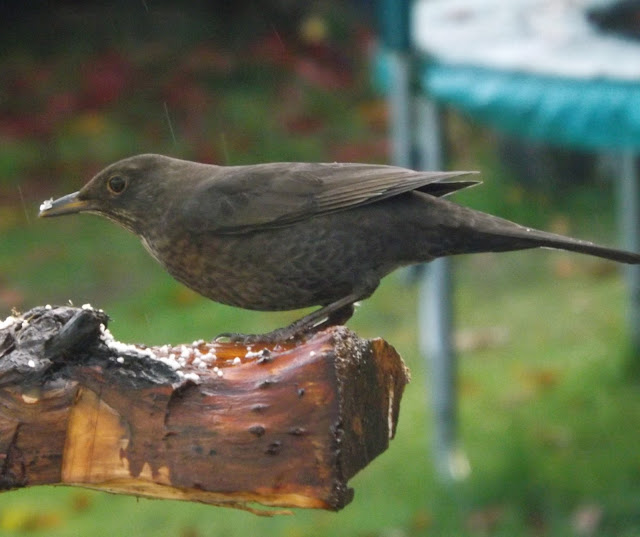 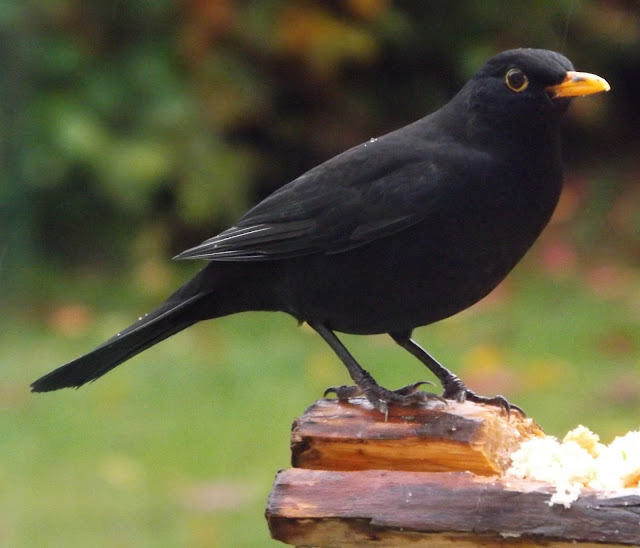 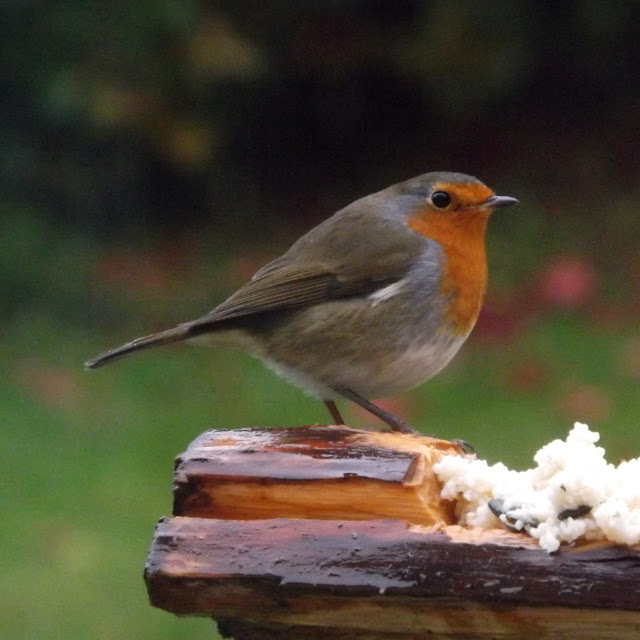 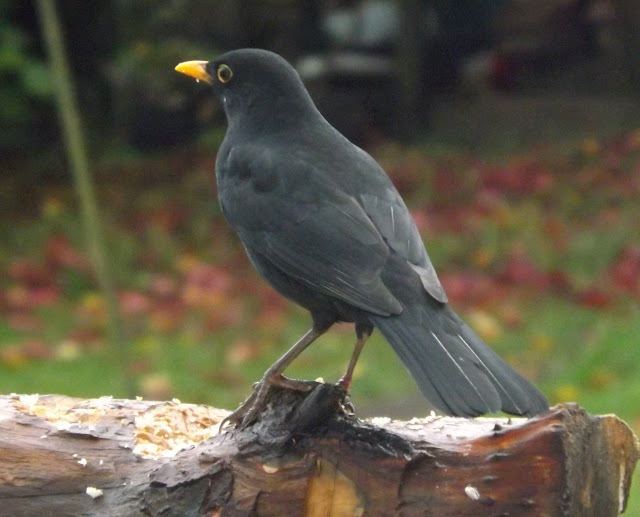 Sorry I haven't been visiting all your blogs this week - it's been a bit full on and it's taken me four days to get this post out! Origami boy will be drawing the winner of the sketch on Sunday so good luck. Incidentally, I hadn't realised I had the word verification thing activated so many, many apologies for the last seven months of verification hell. It's off now which should make things a lot easier. I also enabled anyone to comment and within hours I had a HUGE list of loan companies appear on the infamous "FRISKY FOAL NUMBER 2" post. I've switched that off now! Have a great weekend. It hasn't got above three degrees centigrade here for the last few days so I've given up listening to the forecasters who said it would be 8-14 degrees. Grrrr and brrrrr. Until next time.....the moon from the other night. 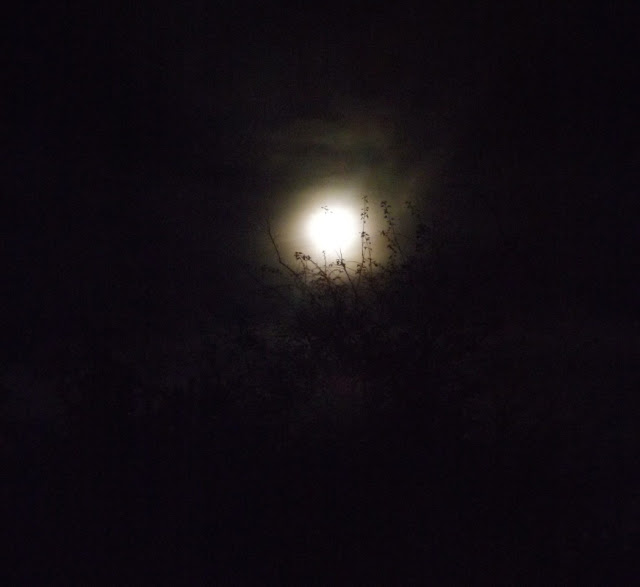