A BIRTHDAY, FROZEN PIPES AND A HOLIDAY FOR TRIGGER 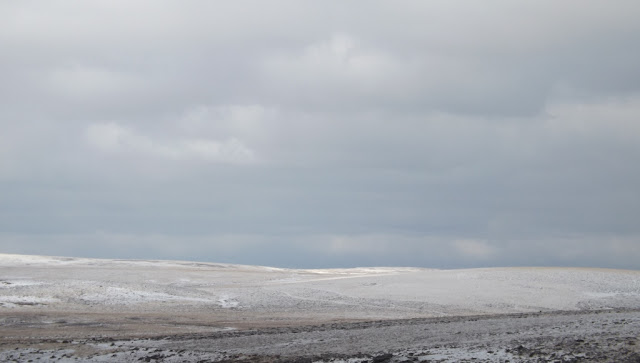 Goodness it's been cold. A bit better today but, looking out of the window, I see it is snowing again. Trigger's trough has had an inch of ice over it twice a day, to be perforated with a metal stake and then hacked at to make a drinking hole. Yesterday was Origami Boy's ninth birthday and we woke to the pounding of feet down the corridor at 5.55am. Lavatory flushed, I noted there was no noise of the cistern filling and then, no hand-washing water. This is VERY odd as we have tanks in the loft that fill slowly from the bore hole and then have their contents pumped to most of the taps in the house. Even if the pipes from the bore hole freeze, we always have the tanks to back us up. The downstairs lavatory and washing machine run directly from the bore hole so we usually have water one way or another. NOT today. The window in the loft had blown out and icy North Easterly winds had been wafting over the tanks, pipes and pump and had frozen them overnight. The pipes from the bore hole had also frozen so we had about a litre of water in a bottle to do teeth but nothing else. Poor Origami Boy spent his birthday breakfast alone whist partner and I took fan heaters into the loft and ran around fetching water for flushing from the nearby stream. I feel terrible about it. At least he has his party on Saturday, taking four friends to the hell that is Crealy Adventure Park. Still, a middle aged woman's hell is a nine year old boy's heaven so we will fix smiles on our faces and wrap up warm. The water is back now thank goodness and the snow is beginning to recede. It's snowing again quite a lot now which is a bit of a worry though. Anyway, here are some pictures from yesterday. I could only have my hand out of my gloves for a minute to turn on the camera before the cold became too much! 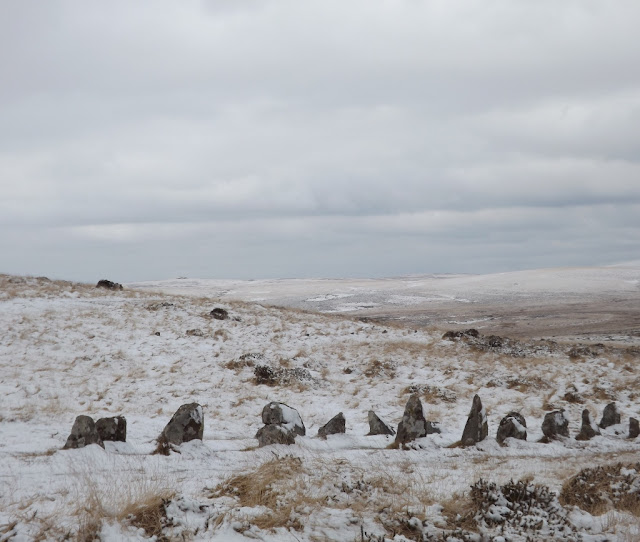 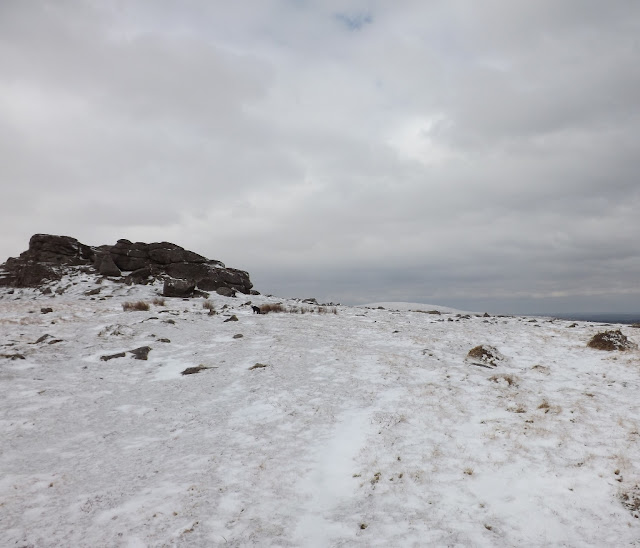 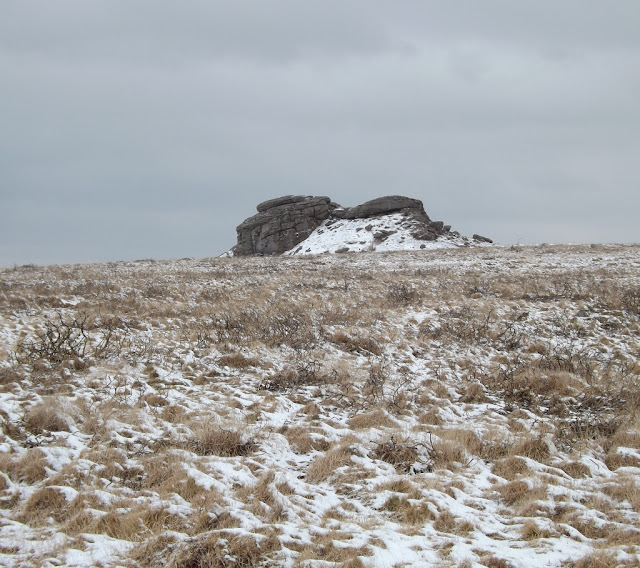 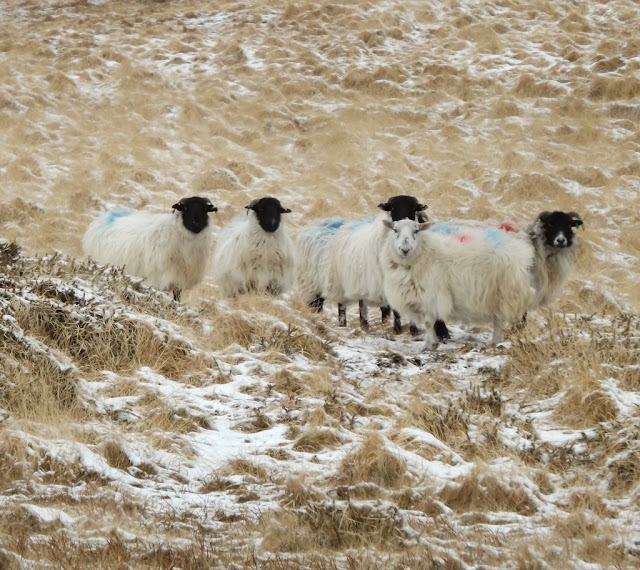 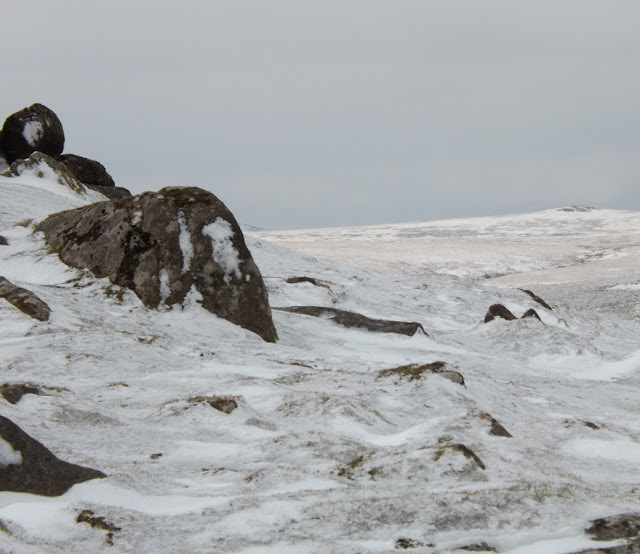 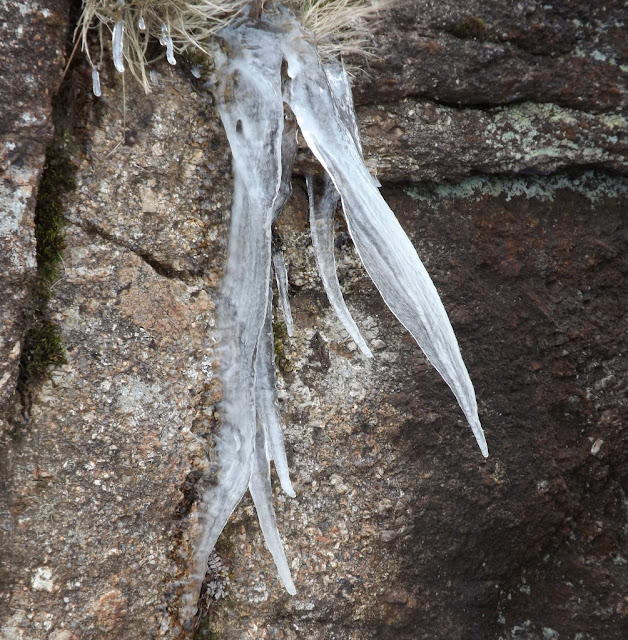 This strange ice structure was hanging off Kestor Rocks. As you can see from the next two pictures, there appears to be nothing inside the beautiful leaf shape but I'm assuming there must have been a blade of grass at least for it to build up around. 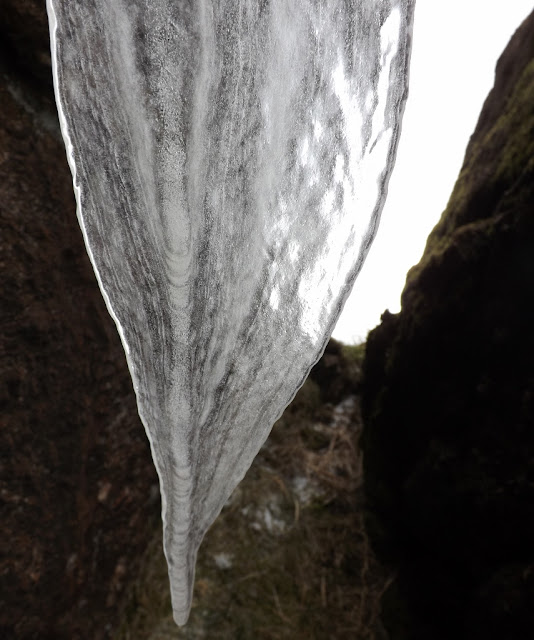 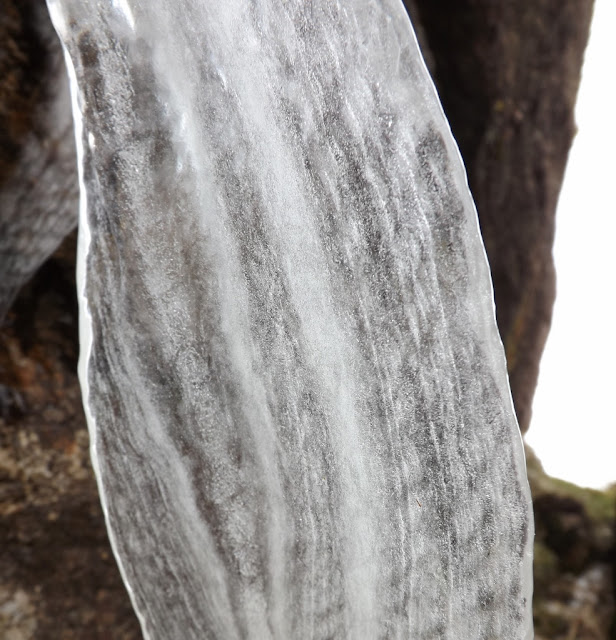 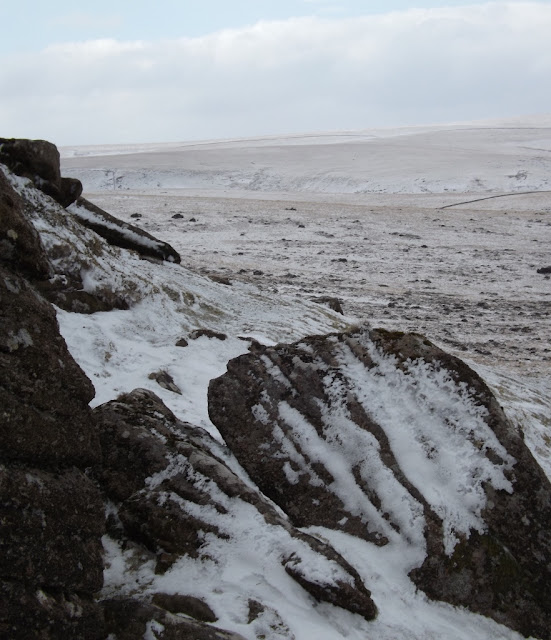 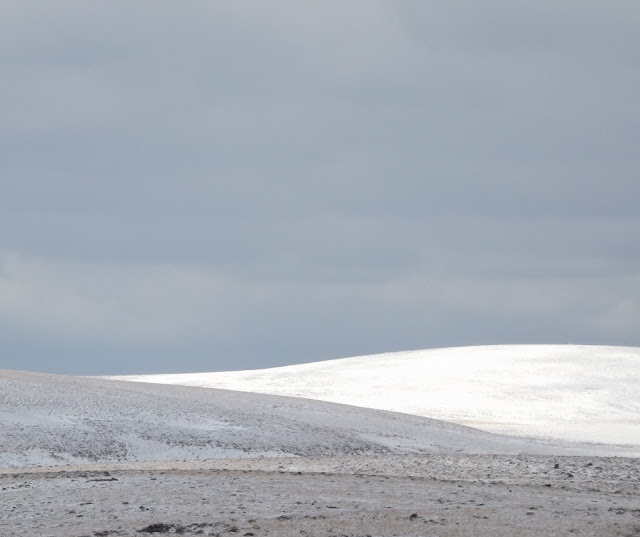 I had good news yesterday in that the farmer who rents the fields up here, including Trigger's paddock, has said I can put him in with their three Dartmoors for a month in one of their fields next to the cattle grid as you come onto the moor. It's about half a mile from home and I'll pass it twice a day anyway. It solves a problem for the moment. Here it is. You can see his new companions snoozing in yesterday's brief spell of sunshine. It's a risk putting him in with an established threesome but one I'm prepared to take in the face of bald paddock and lonely pony. All being well, I'll be moving him on Sunday. 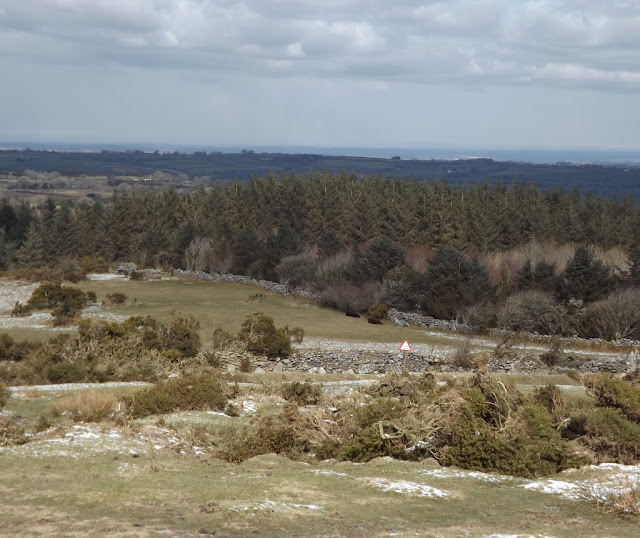 The Mistle Thrush is back. Yesterday I caught it eating porridge. I was spotted and off it flew. 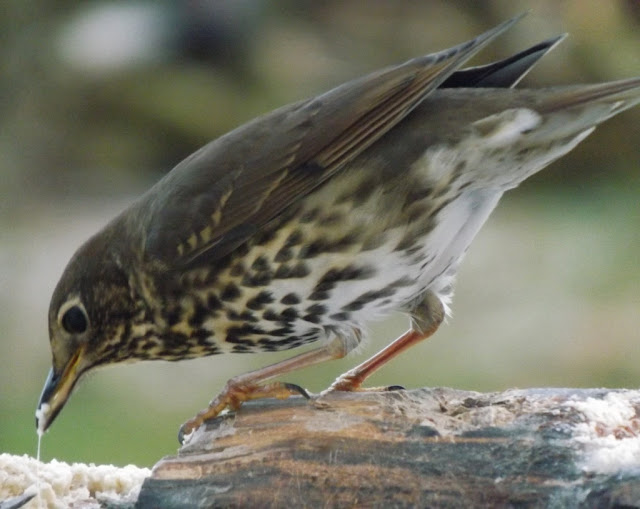 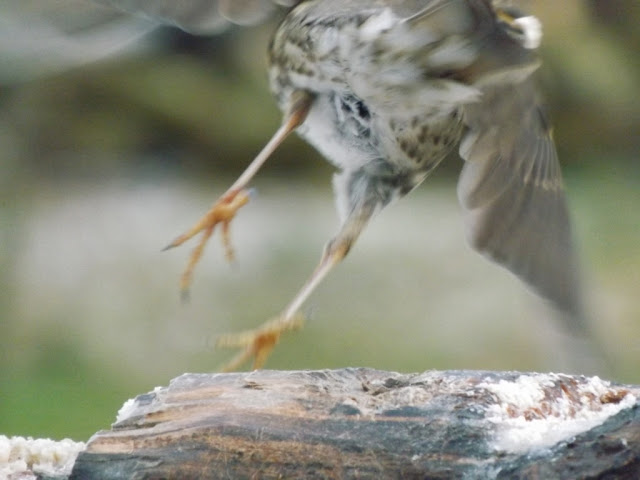 Today, I managed to photograph this Buzzard on the wing. Not brilliant but better than I've managed before. 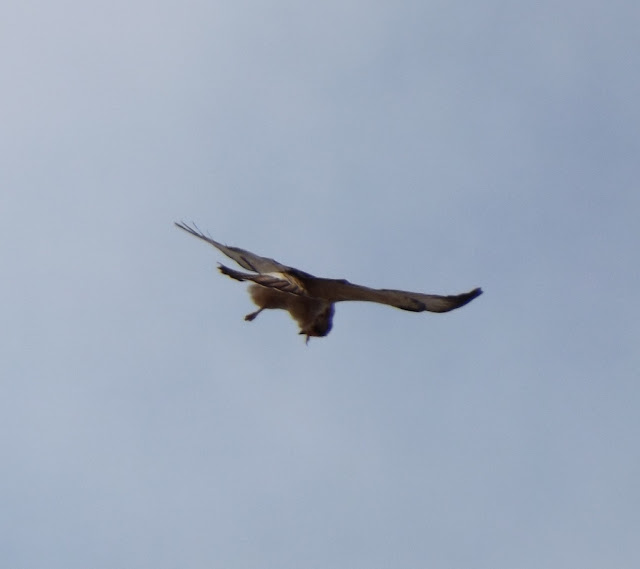 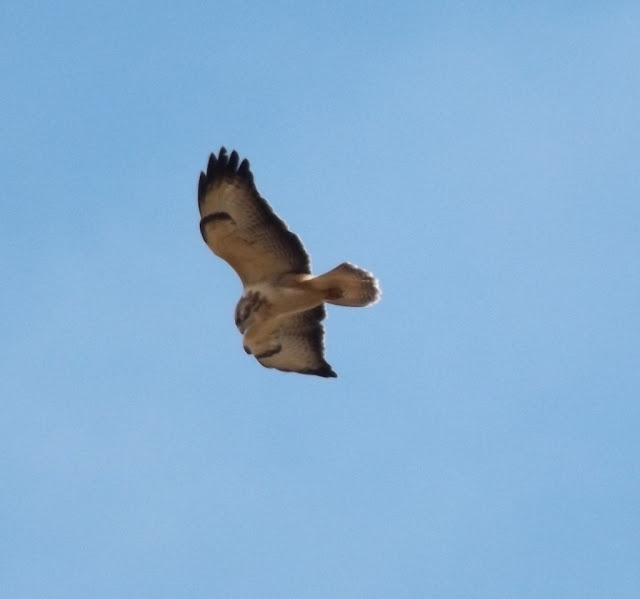 Then, on the way up the drive, I spotted this character staring at us from the huge Beech tree. He's not Snippet's greatest fan and Snippet would have him for breakfast. 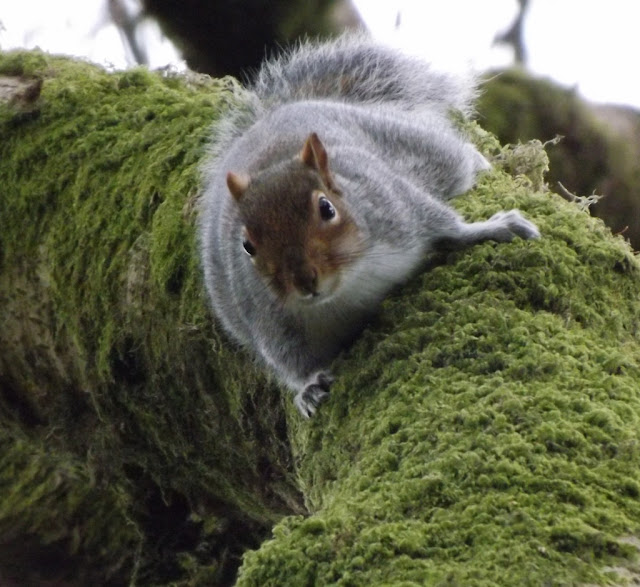 Plans are afoot regarding all our futures. My Mum has expressed an interest in us pooling our resources and buying somewhere that could accommodate us all and be split into two separate dwellings. It means we are unlikely to live out on the moor as Mum is not keen, but she understands that we can't live in the village, so a compromise will have to be found. What it does mean is that we can look at somewhere with enough space for Trigger too which would be great, in case I can't find the right home for him. It will take time I should think, but partner and I are looking at somewhere tomorrow....you never know. Anyway, I'm rambling and really need to do some serious housework and party planning.  Where did those nine years go? Until next time......here's Snip enjoying the snow. 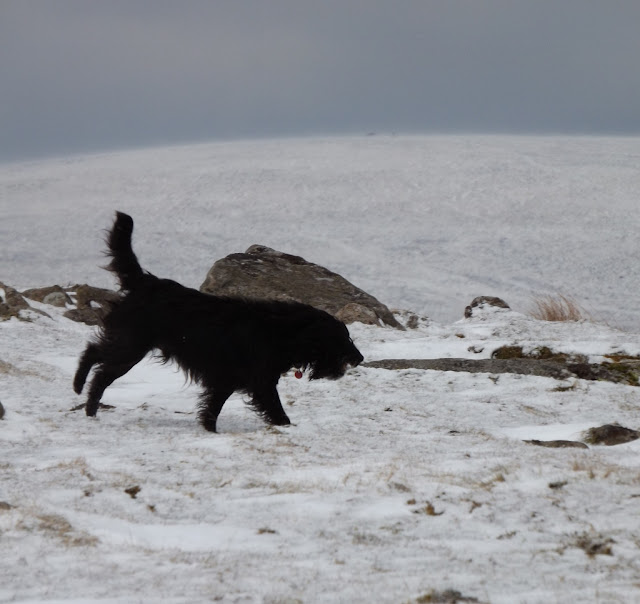