CHASED BY FOAL-A AND A BATTLE WITH THE MARES 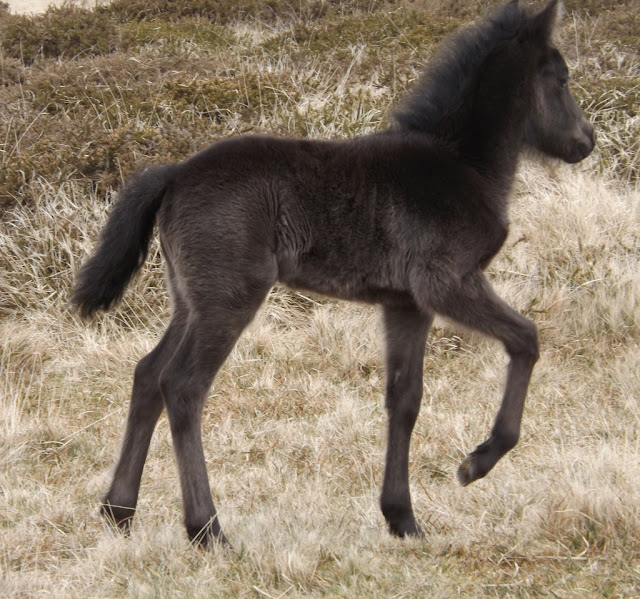 Yesterday afternoon, as Snippet and I turned for home, he lagged behind searching for rodents in tussocks. We were in an area close to Trigger's field where the land drops away and areas are impossible to see from even high up. I walked on but stopped when I heard high pitched neighing  and the thundering of tiny hooves behind me. Snippet shot out of the gorse with Foal A in hot pursuit. What a feisty little thing he is. No fear. I imagine Snip woke him up by mistake. Not a mistake he'll want to make again any time soon. Bizarrely, there was a sense of protecting his mum as she appeared behind him looking completely relaxed. She knows Snippet well. The foal trotted up to her having given up the chase, looking very proud of himself. I managed to catch him as he slowed down having seen me: 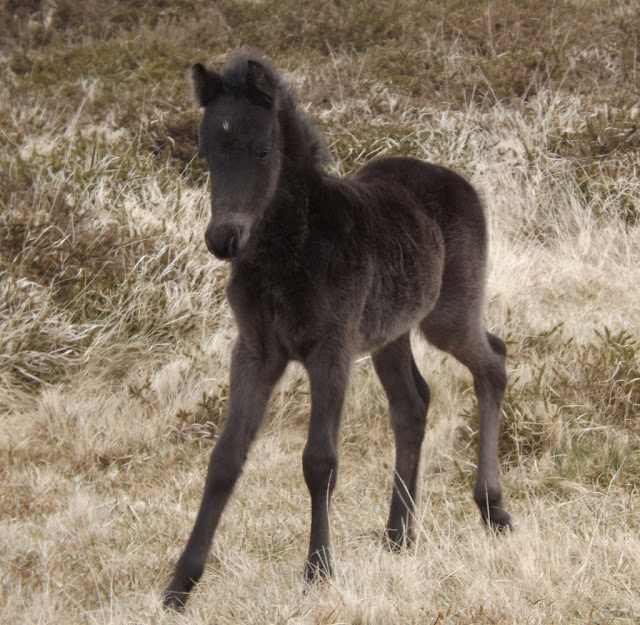 And here he is going back to mum: 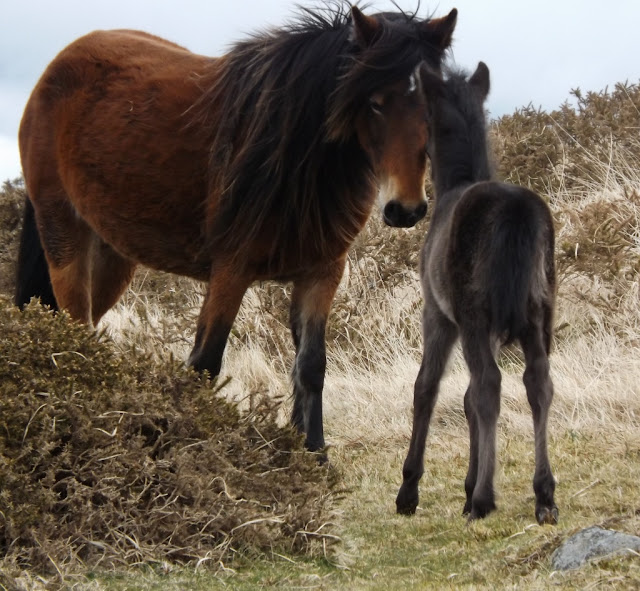 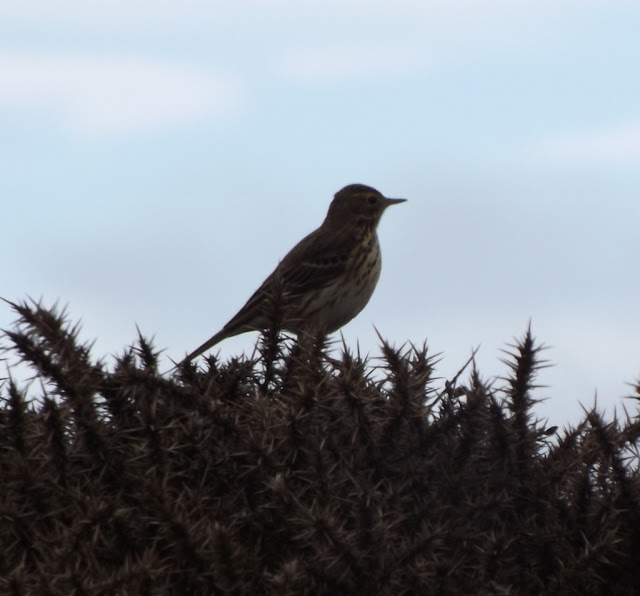 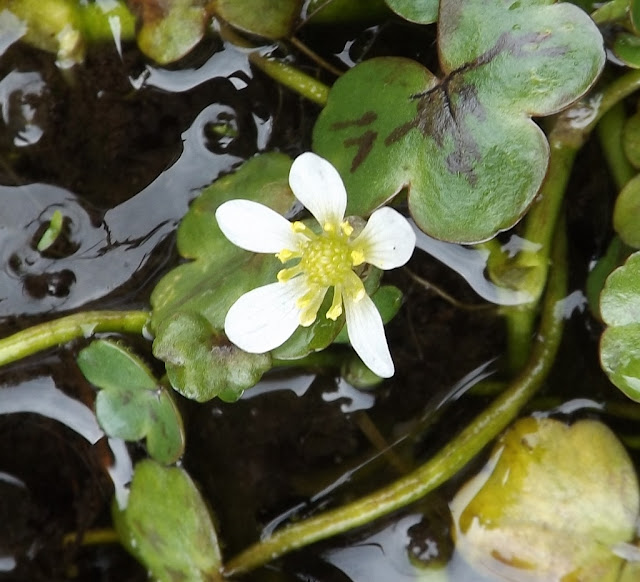 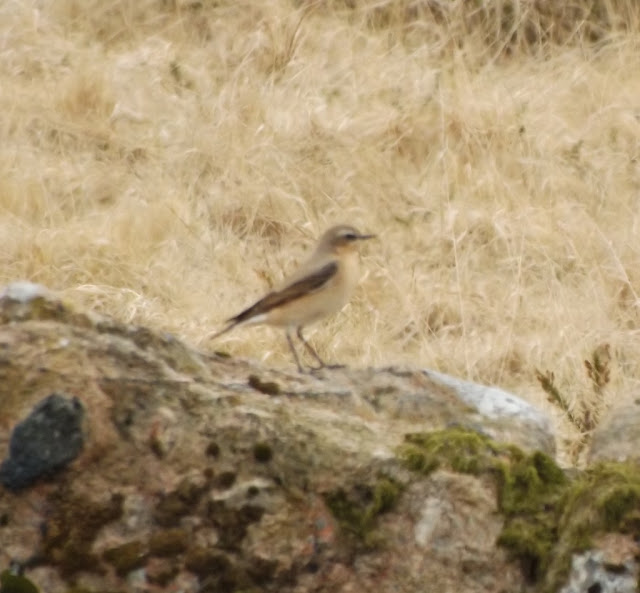 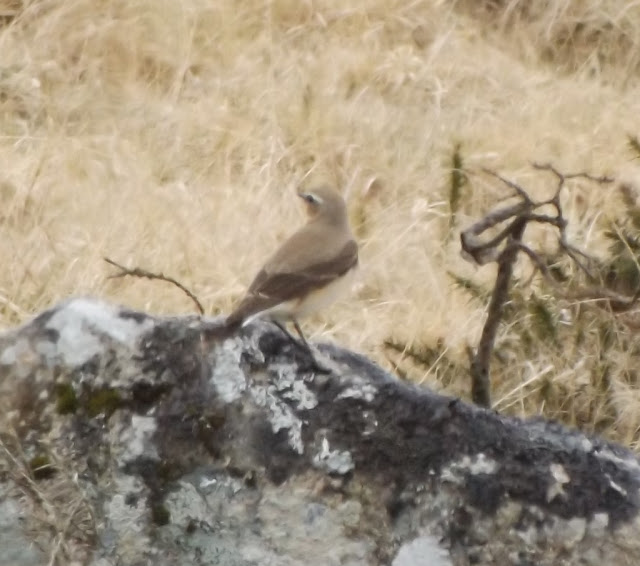 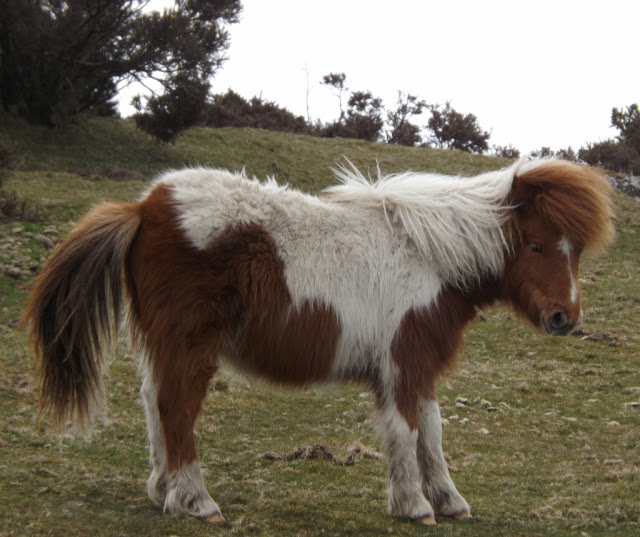 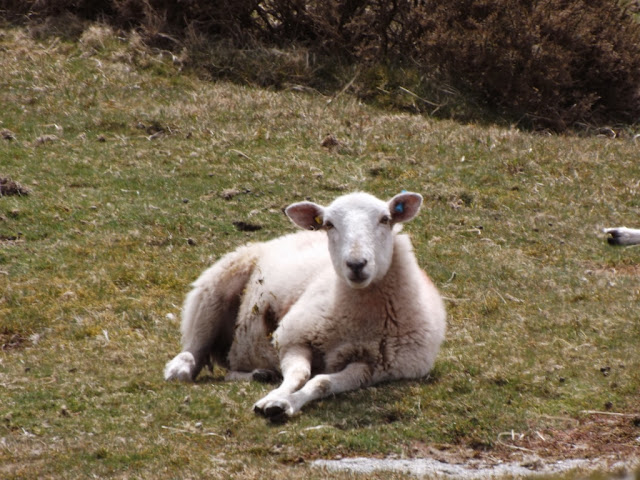 A very relaxed sheep
This morning when I went to feed Trigger, I found Daisy and Ida hanging around the wall to the field. I hadn't seen them for a few days so I was delighted. 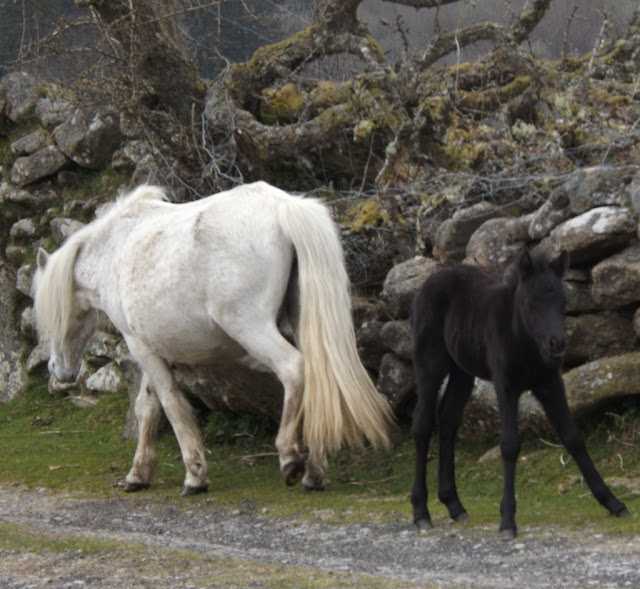 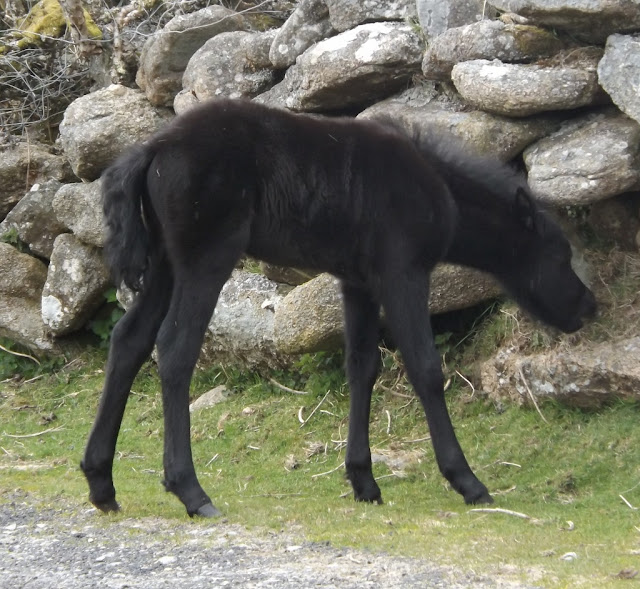 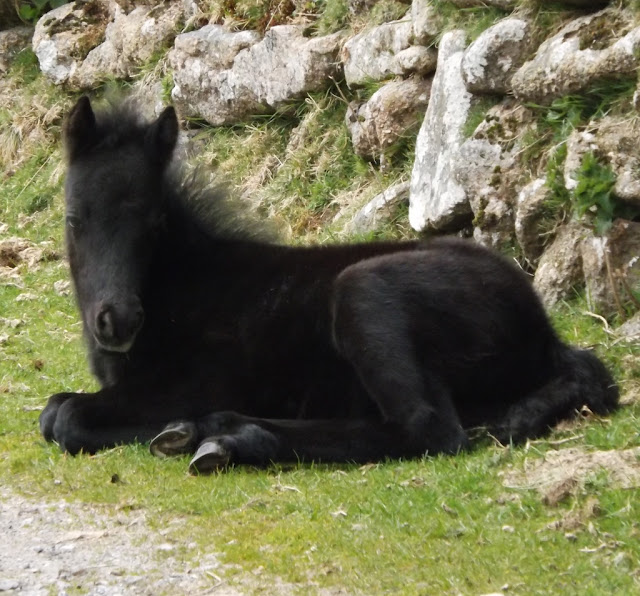 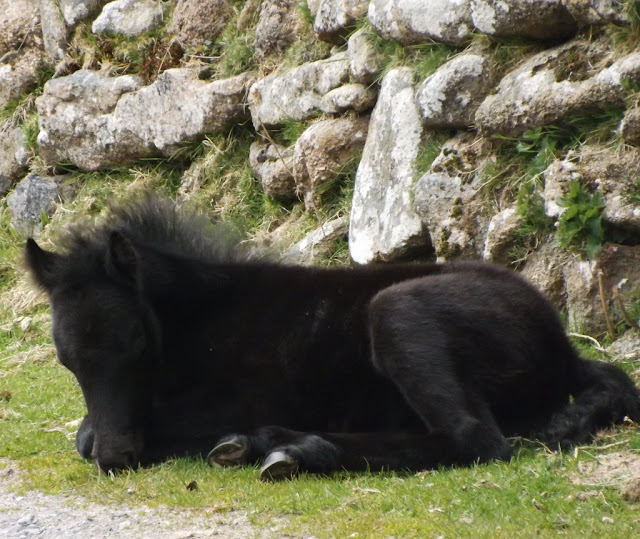 Believe it or not, the two of Ida lying down were taken after I came out of the field. Much more relaxed than Foal A....Snippet was trotting around her and she fell asleep!

Later on today, Colette came to trim Trigger's hooves. It's the first time I've had to actually catch him for nearly six weeks. When I feed him, I just give him a brush and a rub, and keep the mares at bay. I don't use food to catch him; I think it sets a bad precedent. Those high minded principals nearly went out of the window today I can tell you. The wild mares associate me with a battle for food and, as I casually strolled over to Trigger, complicated rope headcollar in hand, they started their relentless onslaught, despite the fact that I clearly had no food-based items about my person. Ten minutes of trying to keep calm with a panicking Trigger trotting around, araby tail in the air whilst shooing three persistent and extremely annoying Dartmoor madams away and I was getting close to losing my cool. However, I held it together and my highly strung boy at the best of times eventually responded to my deep breathing and what I call my calming tube train position....legs slightly bent; centred and solid (as if riding a rocky train with nothing to hold on to) so as to relax him to the point of licking and chewing. This achieved, I tied that stupidly complicated rope halter knot in haste and led him back to Colette, standing patiently at the gate, trying not to laugh I think! Hooves trimmed, I trudged home, only to have to go back again two hours later with food; a walk in the park compared with the earlier shenanigans! 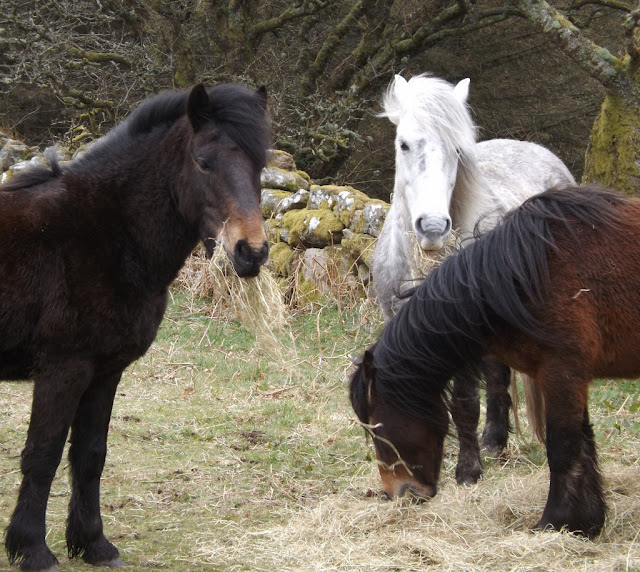 It's been a long day. School library duties this morning and lots of other bits and pieces, none of which have exactly gone to plan. I'm looking forward to the weekend; I hope you enjoy yours. Until next time..............here are some cheeky sheep peering at me this morning. 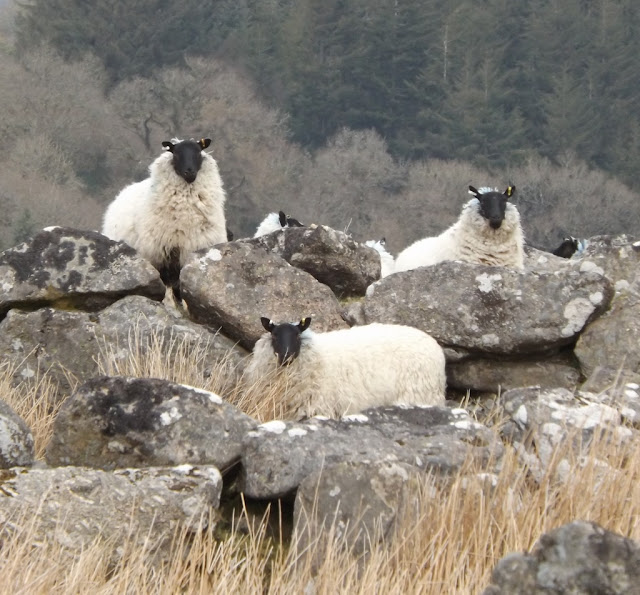